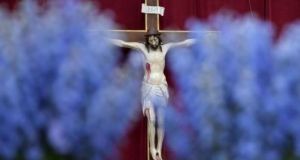 Sinn Féin president Gerry Adams said blasphemy should have no place in the Constitution. He said the programme for government committed to holding a number of referendums, including one on the offence of blasphemy. File photograph: Getty Images

Holding a referendum on blasphemy is more complex than originally thought, according to Taoiseach Enda Kenny, who said there are a number of proposed referendums “backed up”.

He told Sinn Féin leader Gerry Adams in the Dáil that he had originally thought it might be possible to hold a number of referendums on the same date, when “clearly in respect of the Citizens’ Assembly, a referendum will be required in due course on Article 40.3.3” on abortion.

But he said “when you get into these matters and people begin to understand the fors and the againsts, the yes and the no, it is not as simple as it might sound”.

He pointed out that the last time there was a prosecution for blasphemy was in 1855 and there had been none under the 2009 Act.

Mr Adams called for a referendum on the issue as he highlighted the issue of “the spectacle” of British actor Stephen Fry having been investigated by An Garda Síochána on a criminal charge of blasphemy.

It followed remarks by Mr Fry in an interview with Gay Byrne on RTÉ on the issue of God and faith, after which a complaint was made.

The Sinn Féin president said the investigation was not now going ahead and he welcomed this, “but this story was widely reported in the international media with appropriate mocking commentary and some disbelief”.

Mr Adams said blasphemy should have no place in the Constitution. He said the programme for government committed to holding a number of referendums, including one on the offence of blasphemy.

He said Minister for Housing Simon Coveney had indicated last week that the Government might hold a referendum next year on abortion and the extension of the vote to citizens outside the State.

‘Down with that sort of thing’

The Louth TD asked whether the Taoiseach would give a commitment either that a referendum on blasphemy would be included or that a separate referendum on the issue would be held to give everyone the opportunity to say “down with that sort of thing”.

It would allow Stephen Fry and everyone else to express an opinion without the threat of criminal proceedings.

Mr Kenny agreed that a “referendum must be held to deal with this matter”, but he said “there are quite a number of referendums backed up and they take time with referendum commissions to be independent in their analysis and to give people full information so they can vote Yes or No to whatever question is asked - and the matter of blasphemy is one such question”.