Analysis: 2016 was a lost opportunity for Fianna Fáil and a serious miscalculation 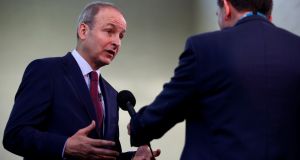 Fianna Fáil leader Micheál Martin. The party faces a dilemma: share power with Sinn Féin and others or stand aside and face the possible wrath of the electorate if events go out of control and there is another election. Photograph: Reuters

Fianna Fáil is battered, bruised and bewildered in the aftermath of the election, with Micheál Martin’s leadership potentially vulnerable in the long term.

The party faces a dilemma: share power with Sinn Féin and others, breaking a much-trumpeted election promise, or stand aside and face the possible wrath of the electorate if events go out of control and there is another election.

This chaos is entirely of its own making. Back in 2016, Fianna Fáil had a chance to go into government with Fine Gael in a grand coalition and turned it down. It was a political calculation at the time that has badly misfired.

Outgoing Fine Gael taoiseach Enda Kenny offered Martin and the party an equal number of ministries and, crucially, rotating taoiseach. Fianna Fáil, still in rehabilitation mode after its hammering in the 2011 election, following the economic crash, thought it a better idea to offer a confidence-and-supply arrangement to a Fine Gael-led government and further rebuild from the opposition benches.

Some observers lauded Fianna Fáil at the time, predicting that it would to be a glorious world of new politics, and things would never be the same again. The clichés came thick and fast, most notably that the face of Irish politics had changed forever. The advocates of new politics, now unsurprisingly gone to ground, argued that it had worked elsewhere, forgetting the adversarial nature of politics in our small republic.

Confidence and supply is nonsense. To govern properly, a government needs a working majority. An opposition party needs to be just that, not engaging in the double political life of lambasting the government of the day while keeping it in power.

True, a grand coalition in 2016 would have had a huge majority, a combined 94 TDs, with Sinn Féin dominating the opposition benches. But that grand coalition would likely have been a success, given the parties’ ideologies are similar, and Sinn Féin would hardly have swept the boards to the extent that it did on Sunday.

Kenny, Varadkar and their ministers were constantly looking over their shoulders at the main opposition party, leading frequently to a policy paralysis

Had Fianna Fáil accepted the 2016 offer, Kenny would have been taoiseach for half its term, with Martin as tánaiste, before retiring and making way for Martin to replace him and the new Fine Gael leader Leo Varadkar as tánaiste.

Kenny and Martin would have worked well together, as would Varadkar and Martin, the large majority allowing them to impose a necessary and ruthless discipline on dissident backbenchers.

There would have been more time and energy to focus on housing and health, issues which prompted angry voters to switch to Sinn Féin. Instead, Kenny, Varadkar and their ministers were constantly looking over their shoulders at the main opposition party, leading frequently to a policy paralysis.

Had that putative FG-FF government delivered to voters, it could well now be heading for another term in office. And Sinn Féin might not be as strong.

So 2016 was a lost opportunity for Fianna Fáil and a serious miscalculation.

Power is in Fianna Fáil’s DNA. When it is staying out of power, “in the national interest”, it is doing no more than making a clinical political calculation in the best interests of the party.

Ireland has changed beyond recognition and Fianna Fáil must change from the certainties of other days, when it was inevitably the largest party by a substantial majority.

Blind political loyalties are no more. My late Irish Times colleague Dick Walsh, in his superb 1986 book The Party: Inside Fianna Fáil, highlighted those certainties when he recalled an exchange between his father and a strong Fianna Fáil supporter in Clare in the 1940s.

“We’re Fianna Fáil,” said the neighbour, “and always were. Ever since the Risin’.”

“Since ‘16?” said Walsh’s father, a man, according to his son, who took things literally.

That Fianna Fáil is no more, as the party found in 2011, when it was reduced to a humiliating 20 seats.

I have no doubt Martin has read Walsh’s book. I would recommend his younger colleagues do so, as part of their education in preparing for the tense and precarious days ahead.