Medical professionals will be able to object to providing terminations

GPs, obstetricians and gynaecologists will be allowed to conscientiously object 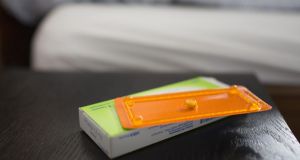 Abortion pill: Health officials have met the Institute of Obstetricians and Gynaecologists and the Irish College of General Practitioners to discuss the options. Photograph: Ute Grabowsky/Photothek via Getty

Minister for Health Simon Harris has confirmed he will allow for GPs, obstetricians and gynaecologists to conscientiously object to providing terminations in medical settings. The Government is seeking to introduce legislation to allow for abortions up to 12 weeks and believes this should be a service led by GPs.

However those representing GPs are critical of the lack of engagement by Mr Harris on the proposed legislation.

The National Association of General Practitioners (NAGP) said there has no consultation with GPs despite the assumption this service will be run by them.

The association, which is the representative body for over 2000 General Practitioners, said that, without consultation, the Minster for Health had presumed that this service will be GP-led. “The NAGP strongly objects to the assumption that this will be a GP led service. Its members are outraged that there has been no consultation.”

Dr Andy Jordan said some consideration has to be made for doctors who will have a conscientious objection to performing terminations.

However, he said that the NAGP does not wish in any way to influence the outcome of the referendum.

“We want the process to proceed and the people to speak. But there are legal, ethical and practical challenges to putting a system in place.”

Mr Harris has confirmed there would be full consultation with GPs and will seek to meet the NAGP and others over the coming months.

He also pledged to allow for doctors to object to providing the service, in a similiar clause available in the Protection of Life During Pregnancy Act.

The wording of the question is unknown but people are expected to be asked to repeal or retain Article 40.3.3 of the Constitution.

The Department of Health has been working with the office of the Attorney General to draft legislation for what may repeal the Eighth Amendment.

A three-day waiting period for women seeking a termination is understood to be part of the Goverment’s proposal but Department of Health sources denied this last night.