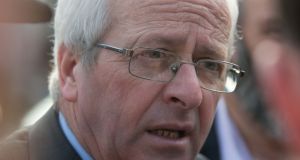 Mr McGrath confirmed he met with his legal team on Friday to examine the transcript of a radio interview Ms Coppinger gave to Tipperary Mid-West Radio last week.

Ms Coppinger was invited on to a programme to discuss claims she made in the Dáil during a debate on the regulation of crisis pregnancy agencies.

During the debate, she had labelled Mr McGrath “a sexist, backward man with an inordinate interest in women’s bodies”.

Ms Coppinger repeated the claims on the radio programme, but did so without the protection of Dáil privilege.

Speaking to The Irish Times, Mr McGrath said her comments were defamatory and needed to be challenged.

“There is now a level of discourse in Ireland where alternative views are shouted down or ignored.

“Ruth Coppinger has her own opinion and I have mine but her comments were outrageous and should not be allowed to go unchallenged. They created an image of me.”

Ms Coppinger said she made the comments on the back of a contribution by Mr McGrath in the Dáil chamber.

He had suggested the Health Service Executive (HSE) should not continue to fund the Irish Family Planning Association (IFPA).

She said she stood by everything she said and would not change a word despite the threat of legal action.

Ms Coppinger said: “The radio interviewer asked me to explain and defend what I said. Those are political observations.

“In and outside the Dáil I stand over it. They are based on his contributions on this and on the Eighth Amendment debate.”

During the debate, Ms Smith labelled Mr McGrath a “bigot” and compared him to US president-elect Donald Trump, while Ms O’Reilly said Mr McGrath was a “rogue agency himself, spewing out an awful lot of nonsense”.

Mr McGrath’s family have outlined their concerns and upset over the comments and the fact they were allowed to go unchallenged.

They have asked the Ceann Comhairle to consider their correspondence at the Committee on Procedures and Privileges, which will decide if disciplinary action should be taken against the TDs.