May backs down despite doubts over DUP appetite for election

Party says no after Dublin, London and Brussels try to devise necessary fudge

DUP leader Arlene Foster addresses the media on Brexit, saying that her party has made clear that "Northern Ireland must leave the European Union on the same terms as the rest of the United Kingdom." Video: Reuters 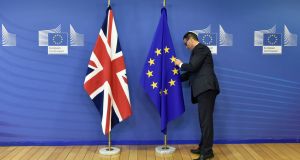 Both British prime minister Theresa May and European Commission president chief Jean-Claude Juncker put a bright complexion on the crash at their brief joint conference offering hope that all would still be resolved before the week is out. But they didn’t provide any answers as to how that might happen. Photograph: John Thys/AFP/Getty Images

It was all supposed to run as smoothly as an episode of BBC’s Strictly Come Dancing. Dublin, London and Brussels would devise the choreography and the interested parties would ensure the steps were executed elegantly and precisely.

In a haze of seamless chiffon and frictionless taffeta, the threat of a hard Border would disappear forever. But then, it seems, Arlene Foster, decided to enter the dance floor with a pair of hob-nailed boots rather than her dancing pumps and in a matter of minutes the dance routine was wrecked, and Theresa, Jean-Claude and Leo were upended on the floor.

Everything had appeared so beautifully synchronised. During the morning we learned that the proposed compromise to ensure a soft border would require the “creative ambiguity” that helped bring about the Belfast Agreement almost 20 years ago. First we heard there would be no North-South “regulatory divergence” post Brexit and then we learned that this phrase was amended to bringing about “regulatory alignment” on both sides of the Border. Who could have an issue with such language?

After the semantic issues were overcome in Brussels, Taoiseach Leo Varadkar and Minister for Foreign Affairs Simon Coveney would make a statement in Dublin and take a few questions on how the Government pulled off such a brilliant coup.

Just before lunchtime, European Council president Donald Tusk was so confident that he could tweet “Tell me why I like Mondays!” clearly expectant that after his phone call with Varadkar that a Brexit breakthrough was imminent. By the end of the day he was more in tune with the Boomtown Rats’ more negative take on the Mondays.

British prime minister Theresa May and European Commission president Jean-Claude Juncker were planning a pleasant lunch to sign off on the deal, but then the DUP leader decided to butt in.

That appears to have been the message she trenchantly delivered to May in their lunch time phone call – a call that had such an effect that according to Varadkar it prompted May to call off the deal. This left the Taoiseach feeling “surprised and disappointed”, which could be interpreted as Varadkar saying to May: “You welshed on a deal.”

Both May and Juncker put a bright complexion on the crash at their brief joint conference offering hope that all would still be resolved before the week is out. But they didn’t provide any answers as to how that might happen.

The DUP wasn’t officially confirming the point but it did seem clear that Foster implicitly at the very least was advising May that if she went for the soft Border formula devised by Dublin, the EU and the British government that the DUP’s confidence and supply arrangement with the Tories would end.

Other politicians here have argued that May should call any such DUP bluff because the last thing Foster or her 10 MPs want is a British general election that would lead to Jeremy Corbyn in power. But on this occasion it appears May decided to blink.

The talk of the special arrangement with Northern Ireland prompted Scottish and Welsh politicians and even mayor of London Sadiq Khan to say they wanted such deals too.

The assurances by Varadkar and Coveney repeated again on Monday that there is no Dublin united Ireland “hidden agenda”, that the Government is wedded to the principle of consent in terms of the future of Northern Ireland, and that the Government is not seeking a new border at British ports didn’t seem to carry any weight with DUP East Antrim MP Sammy Wilson.

“This is all a row about nothing,” he insisted. “This is a cynical attempt by the Irish Government to first of all get Sinn Féin off their back in the Republic and secondly to pursue their own republican agenda,” he added, when speaking on Sky News from Westminster.

Unable to contain himself, Wilson then tore into Varadkar and his Ministers: “This is a political row by a bunch of political chancers who see the opportunity of using Brexit to try and push a republican agenda. It has nothing to do with the Border.”

It’s not the attitude or choice of words that would convince the objective observer that an agreement will be reached by the end of this week, as May and Juncker say is perfectly possible.

Sinn Féin’s Brexit spokesman John O’Dowd raised an interesting question. He found it hard to believe that Foster was not briefed by May ahead of the lunch with Juncker and wondered had more hardline figures in her party prevented her from allowing the deal go through.

All in all it was a curious day, although the politicians who have been involved in years of Northern Ireland peace processing would have been familiar with such setbacks and bouts of high-stakes brinkmanship. Varadkar says he doesn’t want a border in the middle of the Irish Sea. Wilson says he doesn’t want a hard North-South Border. If it were so simple then creating that borderless regime between Newry and Dundalk and between Larne and Stranraer should be possible.

On Monday, Dublin, London and Brussels tried to devise the necessary fudge to make it possible but the DUP, using an old favourite word, said no. The negotiating goes on and all that is absolutely clear for the moment is that Brexit continues to poison the political well in Northern Ireland.