Ross mistakenly votes against his own drink drive legislation

After FF abstains, Bill to impose mandatory ban for drink driving goes to next stage 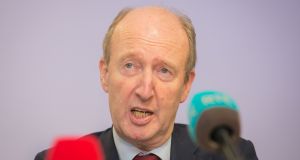 Minister for Transport Shane Ross who voted in error against his own Road Traffic Bill. Photograph: Collins

Minister for Transport Shane Ross voted against his own controversial road safety legislation in the Dáil yesterday when he mistakenly pressed the red button rather than green.

His error was corrected on the floor of the chamber after the vote but Independent TD Mattie McGrath attempted to prevent the correction.

The Tipperary TD went over to the Minister to shake his hand after it emerged he had inadvertently voted with the Opposition.

The Government won by 85 votes to 8 with 37 abstentions.

Fianna Fáil abstained in the vote.

Mr McGrath and a number of Independent and rural TDs opposed the Road Traffic (Amendment) Bill because they claimed it further undermined rural areas which have already been severely challenged economically.

The legislation removes the sanction of receiving penalty points for a first drink driving offences and replaces it with a mandatory driving ban.

Currently first time offenders who have blood alcohol levels of above 50mg/l00 ml receive penalty points and a fine.

The Bill, when amended, will also allow gardaí to seize a vehicle driven by an unaccompanied learner driver.

When the vote was called the Leas Cheann Comhairle Pat ‘The Cope’ Gallagher asked those who opposed the legislation to stand.

A vote can only be taken if 10 or more TDs oppose the Bill.

There was sufficient opposition for the vote to go ahead but eight TDs voted against it including Mr McGrath, Kerry TDs Danny and Michael Healy-Rae, Independents4Change TDs Clare Daly and Mick Wallace, and Independents Michael Fitzmaurice, Michael Collins and Michael Lowry.

During the ongoing second stage debate which concluded on Wednesday night Ms Daly said penalties should be proportionate.

Mr Fitzmaurice suggested learner drivers could do intensive training “two, three or four days - whatever it takes - or two weekends? There would be someone there to provide a certificate stating that while the person has a learner permit, he or she has gone through a certain amount of intensive training and is fit to drive on the road until he or she gets to do the test, given the current waiting lists”.

The second stage of the legislation having received majority support, the Bill now goes to committee for debate on amendments.