Call for end to ‘displays of hate’ at loyalist bonfires 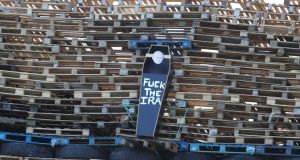 An effigy of former Sinn Féin Martin McGuinness on a bonfire on Clonduff Road in east Belfast. Photograph: PA

A son of the late Martin McGuinness has called for an end to “displays of hate” at loyalist bonfires after a coffin bearing a picture of his father was placed on one in Belfast.

Emmett McGuinness said he had been raised by his parents never to hate anyone or anything.

His comments came after a black coffin daubed with the slogan “F*** the IRA” and adorned with an image of the former IRA commander turned Stormont deputy first minister was attached to a bonfire in east Belfast.

Sinn Féin chairman Declan Kearney branded those behind the display as “hatemongers”.

Like in previous years, election posters of Sinn Fein and other non-unionist politicians were placed on bonfires across the region ahead of the Eleventh Night loyalist celebrations.

At another bonfire in east Belfast, a banner carrying a racist slogan referring to Celtic striker Scott Sinclair was hung up.

Sinn Féin’s Stormont leader Michelle O’Neill earlier called for an end to what she described as an “annual display of hate”.

Mr McGuinness endorsed her comments on Twitter hours after the image of the mocked-up coffin appeared in the media. He wrote: “I am very thankful that I was raised by parent’s never to hate anyone or anything. moneillsf is right, the annual display of hate must end.”

Mr Kearney called on unionist politicians to condemn those behind the coffin stunt.

“This display is a particularly sickening manifestation of the hate we have witnessed across the North over recent days, including some of the most vile sectarian and racist abuse,” he said.

“This is the action of hatemongers intent on indoctrinating bigotry and perpetuating sectarian divisions in our society.

“Their behaviour stands in stark contrast to the work that Martin McGuinness did to build reconciliation and reach out the hand of friendship.

“It is also grossly insulting to the McGuinness family which still mourns the loss of a much loved father, brother and grandfather.

“It is simply unacceptable that unionist political parties still refuse to condemn this kind of hate crime.”