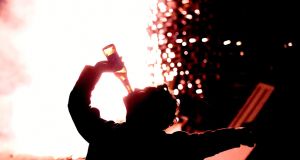 A reveller drinks in front of a bonfire in the Sandy Row area after it is lit by petrol bombs. Photograph: Reuters

Firefighters in the region dealt with 40 bonfire-related incidents – up 21 per cent on last year – on a night when they received 213 emergency calls in total and mobilised to 133 incidents overall – a 49 per cent hike on 2016.

The Northern Ireland Fire and Rescue Service (NIFRS) described the night as “exceptionally busy”, with crews dealing with 95 operational incidents between 10pm and 1am. During the most intense period, the NIFRS’s regional control centre handled an emergency 999 call every minute.

Homes were boarded up at a number of bonfire sites amid concerns around safety and risk to property.

Firefighters doused at-risk buildings with water in an effort to keep them cool as the fires raged nearby. The NIFRS said its two most significant bonfire incidents were in the greater Belfast area. The service also reported one attack on a fire appliance during the night – though no-one was injured.

The towering bonfires, most built with stacks of wooden pallets, drew thousands of onlookers into the early hours of Wednesday.

They are ignited each year to herald the Twelfth of July, when loyalists and unionists commemorate Protestant King William of Orange’s victory over Catholic King James II at the Battle of the Boyne in 1690.

The bonfires often prove contentious and this year was no different.

Sinn Féin reacted angrily to a coffin bearing an image of the late Martin McGuinness being attached to one in east Belfast while Irish flags and posters of Sinn Féin and other non-unionist politicians were a common sight on many fires.

A racist banner referencing Celtic striker Scott Sinclair was hung on another bonfire in east Belfast.

Sinn Féin’s Stormont leader Michelle O’Neill has called for an end to what she described as an “annual display of hate”.

The Police Service of Northern Ireland vowed to investigate any alleged hate crimes.

Advocates of the bonfires portray them as a family-friendly, spectacular celebration of loyalist/Protestant culture.

Their detractors claim they are potentially dangerous, environmentally damaging, magnets for anti-social behaviour and alienating to nationalists.

Democratic Unionist leader Arlene Foster claimed there was a campaign to “demonise” the bonfires.

“Bonfires on the Eleventh Night have long been part of the unionist culture,” she said. “Those who have waged a campaign of demonisation against such celebrations should dial down the rhetoric.”

As the embers smouldered, loyalists looked ahead to Wednesday’s Twelfth festivities. There is always a threat of disorder at a small number of flashpoints but there is cautious optimism this year’s Twelfth will pass off without major incident.

Orangemen and nationalist residents at the most contentious parade – at Woodvale/Ardoyne in north Belfast – have struck a deal that aims to reduce tensions in the area on Wednesday.

Garda seriously injured in hit-and-run on M1 motorway 17:35
Women ‘left in poverty’ due to welfare system built around ‘male breadwinner’ 16:47
Man and woman arrested after gardaí find €53,000 worth of drugs 16:26
Warning issued for fog and freezing fog across the State 16:21
Coronavirus: 13 further deaths and 456 new cases reported in the State 17:38