Martin McGuinness learnt his negotiation skills in the cauldron of Derry

Denis Bradley: ‘He was credited with both the ruthlessness to blow the city to pieces and the care to inflict as few deaths as possible’ 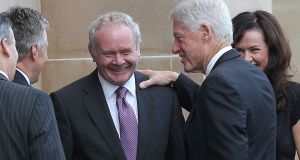 It was the very early days of the Troubles. A group of IRA were gathered in a hall in the Bogside in Derry. Someone came running in to say that there was a camera crew outside who wanted an interview. Those were the days before press officers and since none of the IRA men had ever appeared on the media, the young Martin McGuinness was chosen because, as one of his comrades said, he looked innocent and angelic. Years later, that same comrade, in typical Derry humour, said that was the day they had put McGuinness on the public stage and he hadn’t come off it since.

Many things were put upon McGuinness during his life. He was born at a time and in a place that made it almost inevitable that he would join the IRA. Most of his school friends did the same and some of them were shot dead.

Because he looked the part and because he had a reputation for clean living, he was the perfect choice as the public spokesman. In a then very Catholic city, loyal and supportive of the church, clean living was noticed and McGuinness was being increasingly noticed by the people of Derry. He didn’t drink, he didn’t go with women and he was good to his mother.

But he was also increasingly noticed by the leadership of the IRA. He was seen as disciplined and ruthlessly determined. Even though he wasn’t on the army council, he was chosen by the movement to accompany senior members of the IRA to meet with Willie Whitelaw in London. Ironically, a few years later, the two youngsters in that delegation, McGuinness and Gerry Adams removed and replaced that leadership. There was a period of years when McGuinness was in charge of the Derry brigade that the intensity of violence increased. It was marked by the number of bombs that exploded in the centre of the city. Building after building came tumbling down but the deaths and injuries did not markedly increase because the warnings were of sufficient time and accuracy to clear the targeted area. McGuinness was credited with both the ruthlessness to blow the city to pieces and the care to inflict as few deaths as possible.

Tight-knit communities were the norm in Derry and while such communities have great strengths and resilience they equally contain deep-rooted personal and social problems. When political divisions and incessant violence from state forces and paramilitary organisations alike are kneaded into that mix during a protracted period of twenty or so years, it is inevitable that human weakness will strongly show its face. Marriage problems, money problems, sexual deviancy, were to be had a plenty and they were the stuff that led to a growth of informants, both minor and major, both outside and within the organisation.

McGuinness learned his mediation and negotiation skills in that cauldron of human tension and guilt. He was the “go to man”, the one to see about how a problem might be handled and sorted and on other days the one who judged the punishment that should be meted out. It was the perfect, if crude, classroom for the skills, the insights and the patience he would need and used to good effect in his future political life.

Even though he was the face and the voice of the IRA in Derry throughout the 1970s and 1980s, his image and persona was gradually changing into the politician. He slowly but successfully put distance between himself and the continuing violence but two crude and awful killings dogged him for a considerable time. He was accused of telling Frank Hegarty’s family that it would be safe for him to return home to Derry despite accusations of working with British intelligence, only for the IRA to kill him when he did so. Patsy Gillespie was strapped into his car and made drive to an army checkpoint with a bomb that exploded, killing him and many soldiers. His only crime was that he had a job at an army base.

Those who witnessed McGuinness’s beginning expressions of change, of the need to move from making war to making peace, grew in hope and confidence that the end of the conflict might be in sight. They knew that he had the stature and the determination to lead the republican movement away from of a crude analysis of militarily defeating the British to one of having to negotiate with the Irish and British governments and the various manifestations of unionism that would find compromises and structures to represent all of the diverse histories.

What surprised most people was the competence and the fluency that he brought to his new image and his new role. His great pastime was fly fishing and mostly he wielded the political baton as skilfully as any experienced fisherman. It was clear that he loved the role. He saw the institutions of the Belfast Agreement as his greatest contribution and his recent resignation to bring them down was a blow to his strategy and his morale. Despite that sadness, he understood that the issues that encompassed his life, of unity and reconciliation in Ireland had moved on to a bigger stage.

He will no longer occupy that stage and there will be moments in the coming years when his humour, his insight and his courage in challenging himself and others to reach out to new and better relationships will be sadly missed.