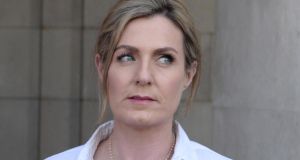 There are rumours Maria Bailey might run as an Independent if not selected. Photograph: Dara Mac Dónaill

The Fine Gael national executive will on Tuesday consider the deselection of Dún Laoghaire TD Maria Bailey as a party candidate in the general election.

Ms Bailey’s position within the party has been in jeopardy since the “Swing-gate” controversy, when it was disclosed she was taking legal action against a Dublin hotel after falling from an indoor swing.

In recent weeks Fine Gael members in her constituency passed a motion asking for an urgent review of the constituency’s general election ticket. This was seen as a desire to remove the Dalkey-based TD from the three-person ticket.

The executive will meet on Tuesday at 6.30pm at the Fine Gael headquarters on Mount Street. While there is no specific mention of Ms Bailey in the agenda for the meeting, it is expected to be discussed under the heading of constituency review.

It is expected the matter will be raised by party secretary Tom Curran.

Party sources have said any such move would have to have the approval of Taoiseach Leo Varadkar and also of the party’s director of elections, Paschal Donohoe.

During the course of the meeting, where the motion was passed by around 80 votes to 60, Ms Bailey told members she was not a victim but neither was she a villain.

When her claim against the nightclub came to light, she gave an interview to Seán O’Rourke on RTÉ radio. Her comments and tone were not well received and significantly undermined her justification for taking the action. She subsequently withdrew the action.

Mr Varadkar has refused to be drawn on the issue of Ms Bailey’s future with the party other than to say he would be guided by the views of members.

Mr Ward is also a member of the national executive and will have to withdraw from any discussion around Ms Bailey’s candidacy.

Fine Gael holds three seats in the four-seat constituency but that is by virtue of it retaining one seat automatically, as Seán Barrett was the outgoing Ceann Comhairle in 2016. There is little prospect of the party taking three seats again, although it should be strong enough to hold two.

If the party were to strip Ms Bailey of the candidacy and choose a replacement, the likeliest candidate would be newly elected councillor Jennifer Carroll MacNeill, who is based in Killiney. Another possibility is Cllr Lorraine Hall.

There have been some suggestions, albeit unconfirmed, that Ms Bailey might run as an Independent if not selected.