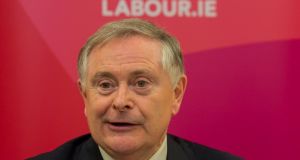 Labour members at the party’s national conference in Mullingar have a pep in their step not seen for a long time at such events.

More younger people attended than in the past three years, and predictions of gains at the next general election varied from four Dáil seats to at least a doubling of their number to 14.

And they believe the party will win two by-elections – in Dublin Fingal and Wexford – where the party has sitting TDs.

Gathering in the hometown of Longford-Westmeath TD Willie Penrose who is retiring at the next election, Labour members, however, remain fairly equally divided about the leadership of Brendan Howlin.

It is on the back burner until after the general election when the party will review the situation.

Dublin Fingal constituency member Barbara Seery, from Balbriggan, believes the party is so low in the polls that a reshuffle is needed for a “new bit of vibrancy. Brendan’s brilliant but it’s time to get something more active moving in the party. It might help.”

But a Longford-Westmeath member who declined to be named believes it is time for a leadership change and she believes the party’s health spokesman, Alan Kelly, is the man for the job. “I think he has good leadership qualities. I think he has a very clear view and he is someone who says it as it is.

“Brendan is very good but I think the association for him and the party with the previous government that took over after the recession is very damaging, as is his association with water issue.”

She says the party needs another few years to rebuild and to get back to its roots by “ensuring that people have a living wage not just a minimum wage, and it’s hugely important that they are a voice for people in low-paid work”.

Two party councillors said they were fully behind the leader.

Cllr Conor Sheehan in Limerick said Howlin “has done an excellent job and took the party from the lowest ebb it was ever at and rebuilt it to a sustainable level. He is a stabilising force”.

He foresees a four- or five-seat gain and says the polls do not reflect the party’s standing. If they go into government there is no contest, but if there is a leadership competition “there are a number of strong candidates including Jan O’Sullivan, Ged Nash, Aodhán Ó Riordáin and Alan Kelly. Any one of those names would make an excellent party leader.”

Cllr Ciara Galvin from Celbridge, Co Kildare, dismisses debates on the leadership as a media obsession and a distraction from the real issues of rebuilding constituencies. “We need to look at our messaging and how we’re communicating with the public because clearly we’re not resonating still. I think we still have a lot of trust to rebuild that we lost at the last government, but we also need to stop harping on about that and focus on what we want to do” to make a difference.

Cian Kelly-Lyth is a Trinity College Dublin student member “on the left of Labour” who thinks the party could return up to 15 TDs. But he believes it’s time for a new leader.

“There are a lot of issues Brendan Howlin isn’t very strong on, such as direct provision. I definitely think we could do with a more radical, younger voice in power to energise the party and bring in more votes. There are not many TDs now who represent younger voters like myself.”