Many anti-repeal TDs now set to back abortion legislation 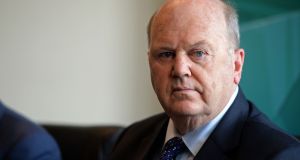 Former minister for finance Michael Noonan who had not declared his position: “We’ll see what is in the Bill but my general disposition would be to support what is being proposed by the Government.” Photograph: Eric Luke

Many TDs who were previously opposed to the Government’s proposed legislation on abortion now say they will vote for it, a survey by The Irish Times has found.

All TDs who had said they were opposed to the legislation for abortion on request up to 12 weeks were contacted on Sunday and asked if they intended to oppose the Bill when it comes to the floor of the Dáil, which the Government says will be in the autumn.

Many said they would support the legislation as they believed the people had voted in the referendum to support it.

Anne Rabbitte (Galway East) said, “I will be supporting legislation wholeheartedly and I always said that. The will of the people has to be acknowledged and supported.”

Fianna Fáil TD James Lawless, who was initially against repeal but changed his mind close to polling day, said: “I’ll be voting for it. I came around to the repeal way of thinking and it is the will of the people.”

Several others did not say they would vote for the Bill, but indicated they would not oppose it.

Waterford TD Mary Butler said she would not oppose, but would “scrutinise” the Bill.

Bobby Aylward (Carlow-Kilkenny) said of the legislation “I won’t be opposing it or I won’t be blocking it under no circumstances”. He added that “there was an overwhelming majority and that’s democracy at its best”.

Deputy leader Dara Calleary said “in view of the size of the mandate I won’t oppose the legislation. It is important that the safeguards as outlined by Government during the campaign are included in it.”

But Éamon Ó Cuív said “there is no legislation”. “My understanding is that they’re going to Cabinet next week to start drafting legislation.” He said he would be “reflecting on all of this”.

Fine Gael TDs and Ministers, including Deputy Tony McLaughlin, who had previously opposed the legislation also said they would vote for it in light of the referendum result.

Minister of State Ciarán Cannon, who voted No, said he would support “every single aspect” of the legislation.

“The people have decided that is what they want, and I am a democrat.”

Minister of State Seán Kyne also said he would support the legislation. “The vast majority of people knew what they were voting for,” he said.

Former minister for finance Michael Noonan, who had not declared his position, said he would await the detail of the Bill, but was likely to support it.

“We’ll see what is in the Bill but my general disposition would be to support what is being proposed by the Government.”

Longford-Westmeath Fine Gael TD Peter Burke said he would support the legislation all the way because of the huge endorsement given to the proposal in the referendum.

Kerry Independent TD Michael Healy-Rae did not say how he would vote on the legislation but said “I won’t hold up or obstruct or impede the legislation.”

Michael Fitzmaurice said, “I’d be either abstaining or not voting. I’m not going against the will of the people.”

Carol Nolan, the Sinn Féin TD who broke with her party on the referendum, said: “I won’t be supporting the legislation as my position remains the same as a pro-life TD who is strongly opposed to abortion.”