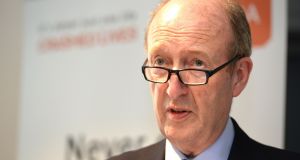 Minister for Transport, Tourism and Sport Shane Ross: “I welcome all suggestions about the best way to reopen Stepaside Garda station but criticism from the man who closed the station is a little bit rich.” Photograph: Dara Mac Dónaill

Former minister for justice Alan Shatter has accused Shane Ross of “bombastry and faking” and misleading voters, over the issue of Stepaside Garda station.

Mr Shatter told The Irish Times Mr Ross had promised voters in Dún Laoghaire-Rathdown “bricks and mortar” but was instead “giving them a prefab”.

The comments were in response to a report in The Irish Times, which stated Stepaside Garda station would reopen as a modular station, which would amount to a facility built in sections and transported to the site.

Initial indications of the plan confirm the station would be facilitated at the same location in Stepaside and would be the size of four car parking spaces.

Mr Shatter, who was minister for justice when the station was closed in 2013, said Mr Ross had engaged in fantasy politics with the people.

“This modular building is probably appropriate. It is essentially a prefab, which carries a certain irony.

“I don’t know whether anyone has analysed how many gardaí are going to occupy a modular building that occupies four car parking spaces. It will just be about big enough to provide two toilets and a washing facility unless what is proposed is for some public toilet to visit.

“The idea that you could provide a modern facility in the space of four car parking space is completely bizarre,” Mr Shatter said.

Mr Ross championed the reopening of the station at the last election and insisted it be examined as part of the programme for a partnership government.

However, figures given by the Office of Public Works estimate it will cost in the region of €2 million to reopen the station as it needs significant refurbishment.

If a modular facility is to be established, it will be significantly cheaper and will take less time to built.

The Minister is understood to have seen the plans for the station in recent days. Three other options have been presented but the Office of Public Works and An Garda Síochána are believed to favour this option.

Mr Ross said: “I welcome all suggestions about the best way to reopen Stepaside Garda station but criticism from the man who closed the station is a little bit rich.”