Lucinda Creighton: Renua will continue even if party wins no seats

Renua leader Lucinda Creighton arriving at the Election 2016 Count Centre said that 'it probably would have been easier to get elected in Dublin Bay South as an Independent, but I've never been one to take the soft option’.Video: Bryan O'Brien 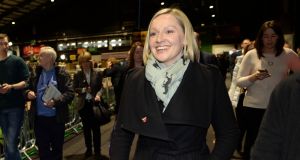 The tallies indicate that Lucinda Creighton represents Renua’s only hope of winning a seat. Photograph: Eric Luke / The Irish Times

Lucinda Creighton has said Renua Ireland will continue in existence irrespective of whether or not the party succeeds in winning any Dáil seat.

Ms Creighton, who founded the party, said she was very proud of what Renua had achieved and described the election as a “first step” for the party.

The tallies indicate that Ms Creighton represents Renua’s only hope of winning a seat. She is locked in a battle with other candidates for the last slot in the four-seat Dublin Bay South constituency.

As she arrived in Dublin Count Centre in the RDS, Ms Creighton said she was very proud of the campaign Renua had run.

“We have left no stone unturned,” she said.

She added: “It’s been a fantastic campaign. I have really enjoyed it. It has been tough and it has been gruelling.”

In relation to the danger of her losing her seat she said she was very philosophical about these things and it would have been easier for her to run as an Independent.

“We took a decision not to take the easy route. It would have been the easy route to run as Independent. We have come together to give people a new positive platform for change.

“I am glad that Renua Ireland has exceeded the threshold of 2 per cent or so it appears form the tallies,” she said.

She added: “Renua Ireland is a party for the future. We will work on the results we had. We had some very good results in a number of constituencies.

“It is a first step. It’s a benchmark. The first of many electoral contests I hope.”

Separately co-leader of the Social Democrats said she was delighted at her own strong showing and at the support the party had garnered throughout the State. She said the party was founded only eight months ago and was run on a shoestring budget but looked like it would easily exceed the 2 per cent threshold for State funding.

Ms Shortall, who is sure to top the poll in Dublin North West and be elected on the first count, said the party might review its co-leadership arrangement “after the dust is settled”, even though the present arrangement was working well.

She said she expected Fianna Fail and Fine Gael to form a coalition after the next election and her party to go into opposition. However, she said its approach would be constructive at all times.