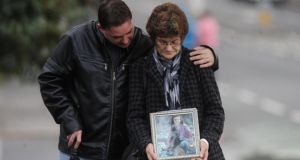 Gina Murray (mother of Leanne Murray killed in Shankill bomb) with her son Gary as they protest on the Crumlin Road in North Belfast. Photograph: Colm Lenaghan/Pacemaker. 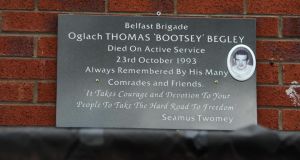 A memorial ceremony in which a plaque was unveiled for an IRA man Thomas Begley in Ardoyne in north Belfast. Photograph: Colm Lenaghan/Pacemaker.

About 100 loyalists staged a protest in north Belfast today against a republican commemoration for the Shankill bomber Thomas Begley.

The demonstration was held as republicans unveiled a plaque to Begley who died when the bomb he was carrying into a fish shop on the Shankill Road 20 years ago exploded prematurely killing himself and nine people, all Protestants, and injuring more than 50.

While unionists in recent weeks described the plan for the commemoration as “grotesque” and “sickening” republicans nonetheless went ahead with the unveiling at lunchtime today.

The event was not organised by Sinn Féin but among those attending was the Sinn Féin Assembly member for North Belfast Gerry Kelly.

The plaque was unveiled in Ardoyne by Begley’s father who also spoke about the pain of the people from the Shankill who suffered death and injury in the bombing on October 23rd 1993.

The plaque from the “Belfast Brigade” of the IRA states that “oglach” (soldier) Thomas “Bootsy” Begley “died on active service”. It also carries a quote from former IRA leader Seamus Twomey, “It takes courage and devotion to your people to take the hard road to freedom.”

The crowd was also addressed by Sean Kelly who was with Begley when the bomb exploded. He was convicted of the bombing but released from prison in 2000 under the early release scheme of the 1998 Belfast Agreement. Kelly said today that he was “truly sorry for the loss of life and injuries caused” in the bombing.

When plans for the commemoration triggered controversy earlier this month Sinn Fein’s Gerry Kelly said the Shankill bombing was a “terrible tragedy” and that the organisers had “no intention of offending anyone”.

While the commemoration was taking place about 100 loyalists staged a protest on the Crumlin Road watched by police.

There was previous controversy 20 years ago when the Sinn Féin president Gerry Adams helped carry Begley’s coffin. In London for a peace conference on Saturday he was asked about today’s commemoration.

“I think we have to be very sensitive about all of this. Thomas Begley has a family, those families arguably are victims,” he told the BBC.

“One could argue that Thomas Begley is not a victim because he was engaged in an IRA operation at the time,” he added.

Mr Adams said his understanding was that the event was being organised by family and friends of Begley’s who wanted to remember him in a dignified and respectful way, and not in any way celebratory or triumphalist.

He added: “The Shankill Road bombing, we all know inflicted awful hurt upon the people who were killed and those people who were injured. So I’m very mindful, as we seek to build the future, that we have to deal the past, and part of the problem for victims is that the past is the present.

“It’s not going away, so we need to be ultra, ultra careful and sensitive to everybody’s feelings in this situation.