Patrick Smyth on how our STV system works. This article was first published in 2016

Ireland's single transferable vote system (STV) of proportional representation is a complex system where the voter has more influence over candidates than almost any other country in Europe. In this 2016 video featuring the late Noel Whelan, we explain how it works. 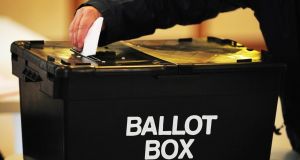 Fine Gael won a 10 per cent seat bonus at the last general election – in other words ten per cent more seats than their vote warranted in percentage terms. Photograph: PA

We were discussing a particularly obnoxious candidate. Call him “Murphy”.

My wife assured us that hers was the best approach – she would use her usual method, casting Murphy as her last preference, No 15 on a 15-candidate ballot paper, and working her way up from the bottom.

Our friend demurred. He would not dream of putting any preference beside Murphy’s name, however lowly, for fear that his vote would somehow creep, transfer by transfer, eventually into the latter’s pile and assist his election.

Though our friend was difficult to persuade, the trust is that my wife is right: anything higher than a 15, and particularly a failure to use all his preferences, could theoretically help Murphy, however slightly.

I will return to why that should be. But the message is crucial: under our almost unique voting system, the single transferable vote (STV) – Malta, the Australian senate and the Northern Ireland Assembly share it – it pays to vote all the way down the list to maximise the effectiveness of one’s ballot for and against individual candidates.

STV has the key virtue of being simple to use as a voter, as simple as 1, 2, 3, although counting is another matter. And reading the entrails of the results involves yet other levels of complexity and sublety for political operators and psephologists. When results are dug down into, they show patterns of party and regional differences, of local disputes, of generational change, of ideological sympathies and alliances.

As a voting system, STV inspires peculiar devotion – twice the politicians tried unsuccessfully to abolish it – and not least because of the extended horse-race character of the counts whose compulsive theatricality more than any technical objections did for automated voting.

Its feature of allowing voters themselves to rank candidates within the same party places a particular emphasis on the individual and encourages intraparty rivalry, parochial “favour” politics, and perhaps even the proliferation of Independents and small parties that we are seeing today.

To analyse results at national level, or in a constituency after the first count, a rough rule of thumb that will provide a prediction of the eventual outcome is to tally the number of quotas or parts of quotas that each party achieves and to add to them an assessment of how much they can expect to pick up in transfers from parties or individuals who will be eliminated.

But transfer rates are incredibly difficult to predict – particulary so in this election – and at national level resulting predictions from percentage shares of vote have become increasingly hard. In not a single constituency is the last seat, in many cases even the last two seats, predictable.

Known to one and all as “proportional representation”, in truth the STV is far from that. As David Farrell and Richard Katz point out in a recent academic article, modern STV elections are only “reasonably proportional” in allocating seats in terms of parties’ share of the poll at local and national level . “In a technical sense it is a misnomer to identify STV as a proportional system at all.”

Parties can work to improve the efficiency of their vote by maximising the rate at which their candidates and allies transfer between them. A formal coalition deal may help – Labour, for example, delivered 71 per cent of its transferred votes to Fine Gael in 1973, as opposed to only 32 per cent in 1969.

And parties can also help that process by spreading their first-preference votes between their candidates to minimise the extent to which they are transferred as reduced surpluses rather than as eliminations. In a system that encourages internal party competition this is by no means easy. (Surpluses arise when a candidate goes over a quota; his or her spare votes are redistributed at a reduced level, while the transfers from eliminated candidates are whole votes.)

Fine Gael won a 10 per cent seat bonus at the last general election – in other words 10 per cent more seats than their vote warranted in percentage terms. This time around, if anything, the result is likely to stray even further from the strictly proportional.

For one thing, there are more three-seaters and four-seaters – the larger the number of seats in a constituency the more proportional the result is likely to be.

For another, the poll findings of huge support for independents and the smaller parties – more than 40 per cent in Dublin in the latest Irish Times IpsosMRBI poll – would seem to reflect a somewhat disengaged voter attitude to candidates, particularly to those from the main parties. That suggests a likely higher than normal reluctance to vote down through the ballot paper once initial preferences are recorded.

Individually, it is true, failing to vote right down through the list has only a marginal effect. But if this sin of omission is repeated on a widespread basis by fellow voters it can actually assist a candidate whom you would prefer to see defeated by lowering the effective quota, and making it easier for him or her to reach it. As an election proceeds and the number of nontransferable votes accumulates, the number required to be elected – the effective quota – falls.

In an election in which there is a strong nontransferable trend, this marginal trend can become very pronounced and results become very unpredictable.

As my wife would insist, “Vote all the way through the list.”