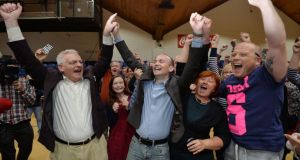 middle-class background and education might seem an unlikely background to being the newly elected TD for Dublin South West, with a socialist agenda and an outspoken opposition to water charges.

There is no doubting his commitment to the marginalised and his work rate, which are similar to fellow Socialist Party TD Joe Higgins, himself a recipient of a broad education in the 1960s when many of his contemporaries were taking the emigrant trail from rural Kerry.

Murphy (31) grew up in Goatstown, in south Dublin. His father, Kieran Murphy, was a senior manager with the Irish division of the food company Mars.

Michael Murphy, a psychotherapist and recently retired RTÉ newsreader, is his uncle.

He attended the Dublin Institute of Education before going on to UCD where he took a law degree in 2004.

By then, he had joined the Socialist Party, becoming a member of its national committee and, later, the national executive committee.

He knew electoral defeat early as an unsuccessful candidate for the presidency of the UCD students’ union in 2003.

Over the years, he has engaged in domestic and international protests, ranging from the campaign against cutbacks in Tallaght Hospital to the Corrib gas dispute and travelling with pro-Palestinian flotillas to Gaza.

He worked as an adviser to Higgins after he won a seat in the European parliament in Dublin.

When Higgins returned to the Dáil in 2011, Murphy replaced him as MEP and set about consolidating his base in the capital. However, he failed to hold on to the strong personal vote Higgins had secured and lost the seat in the European elections last May.

It seemed as if his political career was over until the next general election at least. But the election of Fine Gael TD and minister of state Brian Hayes to the European parliament created a vacancy in Dublin South West and Murphy won the byelection.

It has restored him to frontline politics, where he is likely to remain given that Dublin South West will be a five-seat constituency next time.

Bright, articulate and affable, he will be a formidable force in the Dáil, joining Higgins and fellow Socialist Party TD Ruth Coppinger on the benches behind Sinn Féin and Fianna Fáil.

The two parties will be watching their backs.