Letters show O’Brien had UN authority for actions in Katanga 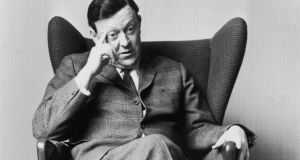 Conor Cruise O’Brien in May 1968, when he was editor-in-chief of the ‘Observer’ newspaper. Photograph: Evening Standard/Getty Images

Conor Cruise O’Brien was disowned by the United Nations for ordering military intervention in Katanga in 1961, but documents published today confirm that he was acting with the full authority of the UN.

In May 1961, O’Brien was appointed as a special representative of UN secretary general Dag Hammarskjöld to oversee the independence of the Congo. In August of that year he ordered UN peacekeeping troops into action to take control of Katanga from secessionist rebels.

In the aftermath of the disastrous intervention, the UN effectively disowned O’Brien and the mysterious death of Hammarskjöld in a plane crash on September 18th during a visit to the Congo to try and resolve the situation further muddied the waters.

The latest volume of Documents on Irish Foreign Policy 1957-1961, to be published today, shows that O’Brien was in fact authorised at the highest level to take the action he did.

A series of letter from Ireland’s then ambassador to the UN, Freddie Boland, to the secretary of the department of external affairs, Con Cremin, deal with the issue in detail.

“Some time after the news of the fighting started to come in on September 13th, I rang Ralph Bunche and asked him whether the seizure of the Post Office and the Radio Station had been ordered by the Secretary-General. I thought it might conceivably have been a local initiative. Bunche replied: ‘Well, not exactly ordered – but authorised. We gave them the green light.’

“An operation involving the taking over control of an entire telecommunications system can hardly be mounted over-night. The preparation of the necessary orders, the assignment of the necessary personnel, briefing sessions, transport and other arrangements, etc. must take at the very least a couple of days. It is virtually certain, therefore, that the Secretary-General had already authorised the operation before he saw us on the 11th and 12th September. He had apparently decided, however, to say nothing to us about it,” wrote Boland.

He went on to say that most of his diplomatic colleagues at the UN defended “this reticence” on the part of the secretary-general saying he could not be expected to disclose such information to some permanent representatives “without making it available to all and that would be tantamount to announcing the intended operations publicly in advance”.

Boland went on to say that the British representative was more critical, suggesting that Hammarskjöld “managed to keep everyone in the dark about his intentions except the Katangese!”.

“I am typing this report myself and making a single carbon copy which will remain in my personal custody. My reason for so doing is that I feel it right to raise with you and with the Minister at this stage the question whether it is wise for Conor O’Brien, in his own interest, to remain in the Congo in present circumstances. In an earlier report, I expressed the view that there would be an effort to place at least some of the blame for the events of the 13th September on Conor’s shoulders.”

Boland went on to say that his female Swedish colleague, Agda Rossel, a particularly close and reliable friend, had reported a good deal of criticism of O’Brien among the delegations, suggesting not that he had acted without proper authority, but that his value judgments were not sound and he was too fond of speaking to the media.

Boland went on to suggest that it was not in anybody’s interests including his own that O’Brien should remain in the Congo.

In the event O’Brien went back to UN headquarters in New York for consultations after he had been denounced by Belgian foreign minister Paul Henri Spaak, who accused him of pursuing a personal policy. He decided to leave the public service in December, 1961, to write his account of what had happened in To Katanga and Back.