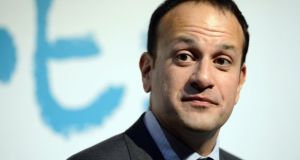 Tánaiste Leo Varadkar said there were no implications for anyone who had been in close contact with him. File photograph: Cyril Byrne

Tánaiste Leo Varadkar is to restrict his movements after a negative Covid-19 test result, in line with public health advice.

Those tested for Covid-19 who receive a negative result are asked to restrict their movements for 14 days, although exemptions apply for certain categories of worker.

In a statement released on Wednesday morning, Mr Varadkar, the Minister Business Enterprise and Innovation, said: “Yesterday I was informed that I was a close contact of someone who tested positive for Covid-19. I was swabbed yesterday and the test has come back negative.

“In line with public health advice, I will be restricting my movements to home and outdoor exercise. There are no implications for anyone who has been in close contact with me. I am perfectly well and will be working from home.”

Meanwhile, the Minister for Foreign Affairs Simon Coveney is also restricting his movements after travelling to Brussels for EU meetings on Monday and Tuesday. Mr Coveney was tested on leaving the country and again on re-entering.

If his re-entering test is negative, he will be cleared to work in his department and the Oireachtas, though will continue to restrict his movements from social settings. He is attending a series of meetings by teleconference on Wednesday.

A spokesman for Mr Coveney said: “The Minister has been tested on return from Brussels and will be tested again in a week. He is continuing his full programme of work.”

Separately, Minister for Finance Paschal Donohoe is also restricting his movements, until Friday, after it emerged his French counterpart Bruno le Maire has tested positive for Covid-19.

Mr Donohoe attended Eurogroup and Ecofin meetings in Berlin last Wednesday week, which was attended by all finance ministers from the 27 EU States.

A spokeswoman for the Minister said on Wednesday he was tested for coronavirus in advance of his trip to Berlin and again upon his return to Ireland, and once again seven days later (last Saturday).

“His movements were restricted during that time. All tests were returned negative,” said the spokeswoman.

“Mr Donohoe was then instructed to further restrict movements for another seven days which he is doing.

“All of his meetings this week have been moved online, similar to how he conducted business throughout the course of last week,” she said.

Minister for Health Stephen Donnelly received a negative coronavirus test result on Tuesday, September 15th, and has been restricting his movements.