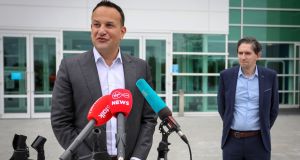 Tánaiste Leo Varadkar accepted that the GP contract leak was wrong and apologised for it, but insisted that it was not confidential or significant information. Photograph: Crispin Rodwell

The release of internal Department of Health emails has put the focus again on one of the most controversial episodes in the lifetime of the present Government and in the career of Leo Varadkar – the leaking of a GP contract to his friend Dr Maitiú Ó Tuathail in April 2019.

Varadkar apologised for his actions in the Dáil in November after a period of sustained political and media criticism but the political fallout of the controversy has had a lengthy half-life, with online attacks on Varadkar frequently citing “Leo the Leak”.

Now the documents released under the Freedom of Information Act have brought renewed focus to the events of April 2019 and fresh questions are likely to be directed at Varadkar in the Dáil on Thursday by Sinn Féin. The emails were released to the party’s finance spokesman Pearse Doherty and published in The Irish Times on Wednesday morning.

The emails come from the department and must be read in conjunction with two other timelines: the events as outlined in the Dáil by Varadkar during his statement on the issue on November 3rd, and contacts between the then taoiseach and Dr Ó Tuathail.

The context was that the government had, after lengthy negotiations, concluded an agreement on a new contract with the Irish Medical Organisation (IMO) on April 3rd, 2019. The IMO was also facing a challenge from Ó Tuathail’s new organisation, the National Association of General Practitioners (NAGP), for influence, members and profile. Its leaders were desperate to know what the government had agreed with the IMO.

The deal was announced by the IMO on Friday, April 5th, and by the government on April 6th. The IMO issued a summary document to its members, with the main points of the agreement. At this time, Varadkar was given a copy of the draft agreement by the then minister for health, Simon Harris.

Varadkar read it and later shredded it, he says. Cabinet approved the agreement the following Tuesday, April 9th.

According to Varadkar’s Dáil statement, “The matter did not return to Cabinet as no significant changes were made between then and its formal publication on May 17th, although there were minor ones. The fact is that an agreement had been reached and the nature of that agreement was not something that was an official secret, highly confidential or commercially sensitive after April 6th. On the contrary, all the salient information was in the public domain and was being discussed at public meetings that GPs were attending.”

This is the essence of Varadkar’s Dáil defence. While he accepted that the leak was wrong and apologised for it, he insisted that it was not confidential or significant information, and that no material benefit was conferred on Ó Tuathail.

But the evidence of the emails suggests that senior officials in the department did believe the document was very sensitive. The emails also suggest that revisions to the document – as a result of ongoing contacts between officials and the IMO – were important, or at least were considered so at the time.

At the time, Ó Tuathail was putting Varadkar under pressure for a copy of the document. Varadkar asked his adviser Claire Mungovan to get a copy from the department, which she did on April 10th – though not, it seems, from Harris’s office. Varadkar posted the document to Ó Tuathail’s home address in Clonskeagh, on April 15th or 16th.

Two days later, Ó Tuathail sent his NAGP colleagues a picture of the document. “To be fair,” he wrote, “Leo always delivers.” His colleagues were ecstatic, and discussed getting one over on their IMO rivals.

Harris’s adviser had requested a copy of the updated version for him on the morning of Monday, April 15th. But the response from Eugene Lennon, a principal officer in the department was immediate – you can’t have it.

Later, perhaps realising that the earlier response was somewhat dismissive of a request from their boss, an assistant secretary (a more senior official), Feargal Goodman, also responded to the request from Harris adviser.

He explained: “To add to what Eugene has said, there is some final material to be agreed with the IMO and the parties are exchanging draft text in this regard. I have discussed with Susan Clyne [of the IMO] in recent days the question of publication of the Agreement document and, for now, we have agreed that the timing of this (once the document has been finalised) should be the subject of an agreed approach between the parties. The IMO are commencing their regional meetings this evening (with a Dublin meeting at which maybe 100 GPs will be in attendance) and it is important to allow this process to get under way in a manner that maximises the chances of the IMO securing GP buy-in.”

It is hard to see how this sits easily with Varadkar’s statement to the Dáil on November 3rd that “all the salient information was in the public domain”. If so, why were senior officials saying that the contract was not completed? Why was the minister for health seeking a copy of the document?

Two days later, Harris himself sent a sharp one-line email shortly after 9am requesting a copy of the document. If senior officials were prepared to stall his staff, the response to the minister himself was different; by 6.30pm that day he had the document.

Another email from Goodman, the assistant secretary, explained: “This will actually be the first properly presented version of the document, as up to now there has been a working document for the purposes of negotiation, with various aspects of the language and presentation to be tidied up at the end. The IMO have in any case signalled that following their current series of regional meetings they may seek minor additions, so my assessment is that it will be next week (or even the week after) before we have a fully completed and signed-off agreement between the parties.”

Varadkar’s spokesman has vigorously denied the significance of the email exchanges, insisting that the document sent to Ó Tuathail was the early version of the contract which Harris had given him earlier in the month. Harris was seeking a later version, he says, in his contacts with his officials. But it is Varadkar himself who insisted that there were no significant changes between the two documents.

If Varadkar is right in the assertion he made in the Dáil that there was little or nothing significant in the document he leaked to Ó Tuathail, then the department officials were wrong to be so protective of it. If he is right that there were no significant changes made, then Harris was mistaken to be so eager to get the updated version. If the leaked information was already in the public domain, Ó Tuathail was wrong to be getting so excited about it.

If Varadkar is right, in other words, lots of other people must be wrong.