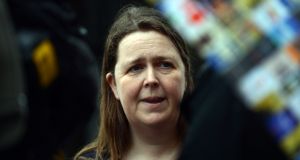 Labour’s Joanna Tuffy: I am relatively happy . . . I feel momentum going towards us. Photograph: Cyril Byrne

Private polling research by the Labour Party has given it hope that it could capitalise on concerns of a large block of non-Coalition supporters that a change in government might damage the economic recovery.

The research, conducted for the party by Red C and seen by the The Irish Times, shows that a block of 16 per cent of all voters (who say they are non-Government supporters) worry that a new government might stall the recovery.

Separate findings in the poll also show that 71 per cent of undecided voters believe the country is on the right track, although a majority of non-Coalition supporters believe they have not felt the benefit of the recovery.

Labour’s support in Dublin is at 14 per cent compared to 9 per cent nationally, suggesting, if the poll findings are accurate, that the party will be in a position to defend seats it holds in most constituencies in the capital.

A number of Labour TDs said yesterday they were confident the party could win 15-20 seats in the general election, based on more positive feedback from constituency canvasses.

Privately, many Labour TDs believe the party must win at least 15 seats to persuade its membership to enter another coalition. They point to the experience of the Progressive Democrats, which lost all but two of its seats in 2007.

Back in the mix

“I think we may be closer to winning 20 seats overall myself,” Mr Nolan said. “On my canvassing on the ground, I no longer sense that people think we are finished or can be written off.”

In Dublin Mid West, Joanna Tuffy said there was far more openness to the Labour Party now than previously.

“In the local elections they gave us a kicking on the doorsteps,” she said. “But the engagement is better. I am relatively happy and feel I have a battle on my hands. I feel momentum going towards us.

“They are saying we want the Government returned,” she said. “That means Fine Gael for a lot. It’s our job to persuade them to vote Labour as well.”

Ten candidates are highlighted in constituencies where the party has not had Dáil deputies before, including Eoin Ó Broin in Dublin Mid West, Maurice Quinlivan in Limerick City, and one of its two candidates (Micheál Mac Donncha or Denise Mitchell) in Dublin Bay North.