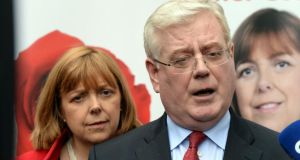 There’s no glossing over the fact that this has been a terrible election for Labour. It has taken a drubbing almost comparable to that taken by Fianna Fáil and the Greens in the general election of 2011. While the drop in support since the 2009 local elections is slightly smaller than that of Fine Gael, the consequences are devastating as it had a smaller support base. Its baseline support figure of 7.5 per cent is lower than at any other time since the mid 1980s.

It is under attack in working-class areas from Sinn Féin and smaller socialist parties, and in middle-class areas by the Greens and Independents.

There have been very few compensating factors for the party. Some of its incumbents did very well to hold on, but too few new candidates made a breakthrough.

The figures make for grim reading for the party. Its number of council seats will drop from almost 140 to below 70. The most devastating losses have taken place in Dublin – it has seen Sinn Féin replace it as the dominant party on the city council and its representation drop from 17 to about seven – compounded by the loss of the seat of Lord Mayor Oisín Quinn. In Fingal, too, the party has lost six of its nine seats, some of which have been snapped up by Sinn Féin.

The picture around the country shows few glimmers of hope. Strong incumbents with a loyal personal following have tended to survive.

The party’s candidates are beaten dockets in the three Euro constituencies, and its two candidates were distant finishers in the byelections.

Crisis meeting The implications are very serious. Eamon Gilmore and Enda Kenny meet tonight for what is essentially a crisis meeting. Over the weekend, Arthur Spring raised the question of leadership but there is no immediate threat to Gilmore, although there will be a sense of crisis and growing panic within party ranks. Clare TD Michael McNamara went further last night and called for all Labour Ministers to stand down with the exception of Brendan Howlin.

The immediate priority will be a major Cabinet reshuffle with new Labour Ministers taking over new portfolios. The junior partner will also be looking for policies that signal clear changes in direction. The next crisis is just five months away, an unenviable €2 billion budget adjustment.

There are growing doubts as to whether or not the Government with the biggest-ever majority in the history of the State will see out its full term.