Labour’s survival presents it with host of identity issues 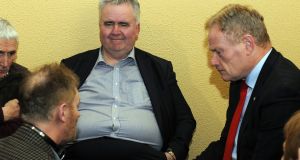 It was the worst election in the Labour Party’s 104-year history, made even bleaker by the prospect of losing Dáil speaking rights.

The junior Coalition party is rightly breathing a collective sigh of relief therefore with the election of Willie Penrose in Longford-Westmeath.

Penrose had conceded defeat on Saturday but managed to stage a Lazarus-style comeback to secure the final seat in the 32nd Dáil yesterday.

His victory is hugely significant because it ensures the party has the magic seven seats that secure speaking rights in the Dáil. More importantly for their members, it seems, is that they are not on the same footing as the Anti-Austerity Alliance-People Before Profit group.

It is a spectacular fall from grace for Labour. After a historic 2011 election to a bittersweet victory of speaking rights secured in the next Dáil.

It had contested the previous general election proposing Eamon Gilmore as taoiseach and is now silently celebrating securing seven seats.

Labour is fighting an uphill battle for relevance over the coming Dáil term in a Dáil packed with Independents and smaller parties stealing their clothes and their supporters.

Sherlock said he was confident the party would find its voice in the new parliament. “There is a place in Irish society for a Labour Party. We have to assess what that means and what that place is.

“Clearly the party has been rejected by the people and they did not want the proposition of Fine Gael and Labour.

“We have been in a similar position in the 1980s and 1990s when we left government. We will find our relevance and our voice but, right now, we are processing the loss and what it means. My colleagues who have lost their jobs are at the forefront of my mind.”

The big question for the party is how it can attempt to regain the support from those who abandoned it. Those who voted Labour in 2011 have changed allegiances. Angry supporters have swung to the AAA-PBP, Sinn Féin and other left-wing Independents.

And those who seek social change are shifting towards the Social Democrats and Independent TDs. Labour has survived some bad elections in the past by merging or incorporating other parties. That could be their only chance of now.

One thing it has agreed is to support the nomination of Enda Kenny as taoiseach. The party said this was what they had offered the electorate during the election and it would be remiss to abandon it.

However, its support stops there and decisions on whether to support legislation or budgets would be made on a case-by-case basis. Howlin said: “Labour will not be in government. We have no mandate for government. Our strategy is to rebuild the party and to reconnect with the constituencies to ensure we are better-placed next time out.”

Tánaiste Joan Burton insists she is willing to play her part in whatever role the party asks of her. However, there is widespread expectation she will step down as leader within months. Sherlock and Howlin are shaping up as the only contenders. Labour has lived to fight another day but its future is far from rosy.