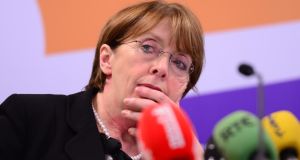 A number of Independent TDs, including Labour rebels, have held discussions about organising an umbrella group of left-wing candidates to run in next year’s local elections.

Some of the TDs involved say it could be the first step to establishing a broader left grouping – but not a political party – ahead of the next general election.

The emergence of the Reform Alliance group of Fine Gael rebel TDs on the right of the political spectrum has convinced those on the left of the need for closer co-operation.

Disaffected
It comes as some disaffected Labour members, including councillors who have left the party, say there is space for candidates to the left of the party, but not as far left as parties such as the Socialist Party.

One TD said there had been preliminary discussions about running “left-wing and community candidates” under the banner of a loose grouping or brand such as “Independent Vision”.

The TD said an announcement could come shortly after Christmas, with the possibility of a large meeting in January. “There is no question, it is going to happen.”

When asked if discussions had taken place, Ms Shortall said there had been “nothing formal”.

Mr Pringle said there was “an appetite there for an alternative approach.”

One TD, who did not want to be named, claimed the local elections could provide a precursor to forming a stronger political alliance. But there were also talks – described as more pressing – about forming a Dáil grouping.

Former Fingal County Council mayor, Cian O’Callaghan, who resigned from the Labour Party earlier this year, said there was “definitely the potential for something . . . It will be broader than people who left the Labour Party.”