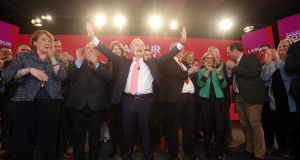 Labour Party leader Brendan Howlin has accused Taoiseach Leo Varadkar of sending out mixed messages on the “toxic racism” which he says has entered Irish politics.

He also claimed the Taoiseach was either ignorant or contemptuous of the perils of climate change.

In a hard-hitting address at his party’s national convention in Mullingar, Co Westmeath, Mr Howlin also singled out the Taoiseach for strong criticism on climate change and for his “republic of opportunity” policies.

The Labour leader told the audience of 600 delegates that his party would not consider going into government with any party that did not support its five core policies on work, housing, healthcare, children and climate change.

In clear reference to recent protests over direct provision centres and also to former presidential candidate Peter Casey’s comments on Travellers, Mr Howlin said toxic racism needed to be called what it is.

“Long-standing taboos have been broken. We’ve seen it happen elsewhere. But it doesn’t have to happen here.”

He then accused Mr Varadkar of sending out “mixed messages, at best”.

The Labour leader also questioned the Taoiseach’s promise to create a “republic of opportunity”.

He asserted that it did not exist, claiming there was “no real opportunity” for those in low-paid jobs; facing rent hikes of 4 per cent each year; or those paying more in childcare than they earned.

The address gave a platform for the Labour leader, whose party was in government with Fine Gael until three years ago, to make his most scathing attack on his party’s erstwhile coalition partner, and Mr Varadkar in particular.

“Leo Varadkar has talked about warmer winters being a ‘benefit’ of climate change. This shows either incredible ignorance or else serious contempt for science.

“It’s certainly an insult for those already suffering across the globe. We have one generation to fix this problem. It’s time to get real. The Government’s current plans are simply inadequate.”

Pointing to child homelessness, over-spending on the national children’s hospital and the CervicalCheck scandal, he contended the Government had failed to share the economic recovery across all of society.

He also reserved some criticism for the main Opposition party. “Fianna Fáil has sat on the Opposition benches where to be honest they’ve just been taking up space,” he said.

However, in an acknowledgment of the political reality that the next government would be led by one of the two parties, he set out the party’s stance on coalition.

“Progressives always have to weigh up whether we can best serve the people from inside government or from opposition.

“Labour will not support any party to form a government, including from opposition, unless they agree to implement our core policies of work, housing, healthcare, children and climate.”

On work, the party has campaigned for a living wage. Its housing policies include a demand for a rent freeze and a plan to build 80,000 affordable housing units. Its healthcare policies emphasise primary care, while it supports a childcare working parents’ scheme. The main plank of its climate policies is a €2 billion fund.

Mr Howlin also pledged to resist increasing the eligibility age for a State pension to the age of 67.

He also said that Labour would ban all ban political advertising during elections on social media, including Facebook and Instagram. He also promised his arty would campaign to ensure that public service broadcasting would be properly funded.

“We need to maintain a vibrant, independent RTÉ, ” he said.