Labour entering government with FG would be nightmare, says SF 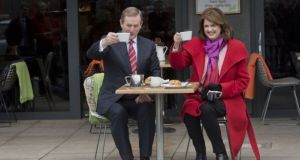 Sinn Féin TD David Cullinane said the possibility of the Labour party considering re-entering coalition was a “nightmare” government scenario that “will be bad for public services, bad for workers and bad for politics”.

Labour Ministers and TDs will speak to their constituency members this weekend about a possible return to government with Fine Gael.

“Mícheál Martin and Enda Kenny continue to peddle a line that Sinn Féin is not interested in government. They accuse us of sitting on the fence while simultaneously ruling us out. Both leaders have steadfastly refused to talk to Sinn Féin. They can’t have it both ways.”

But Minister for Communications Alex White said on RTÉ Radio on Saturday it was “way, way premature for anybody to be thinking that the Labour Party is preparing to go back into government”.

Mr White, who has lost his Dáil seat, said on Saturday with Claire Byrne said the party’s instinct after returning hugely reduced, was to go to the opposition benches.

They had been pushing other parties including Sinn Féin to step up to the plate “and that hasn’t happened. And we can hardly be saying that to other parties and not have some preparedness to listen to others, particularly Fine Gael, who have approached us and asked us to consider returning to government”.

He said the Labour party had always but the country first but “we do have to think of our party now and we have to rebuild it”.

Following intensive discussions in recent days and renewed requests from acting Taoiseach Enda Kenny, senior Labour figures are increasingly convinced that they should explore a new coalition deal with Fine Gael and the Green Party.

Fianna Fáil leader Micheál Martin has told party figures he will not attempt to block Labour’s participation in government. Mr Martin has said that it is not up to Fianna Fáil to pick who Fine Gael goes into government with but that his offer to facilitate a minority government stands, subject to agreement on how the new arrangement would work.

Fianna Fáil’s position is that Fine Gael must prove it has the declared support of at least an additional six deputies, on top of the 52 who voted for Mr Kenny on Thursday, before it agrees to facilitate his election as taoiseach.

Mr Kenny has been intensively lobbying Labour Ministers about returning to government in recent days, and held another meeting with Tánaiste Joan Burton on Thursday.

His preferred option is a government made up of Fine Gael, the Labour Party, the Green Party and some Independents.

In advance of a meeting today between Fine Gael and the Independent Alliance, one of the group’s founders, Finian McGrath, said that Independents would expect at least five cabinet seats if they agree to get involved in a Fine Gael minority government.

Meanwhile, Siptu president Jack O’Connor said his personal view is that the Labour Party should “use its mandate, if it can, in the interest of working people and those who depend on public services.”

It is clear, he said, that “either Labour makes a contribution to stable government or there is another election.”

Stressing he was giving his personal view, Mr O’Connor said that Labour “would need to be clear in its demands” – on investment in public services, the minimum wage and the workers’ rights agenda.

Strong resistance There is certain to be strong resistance from parts of the Labour Party organisation for any such proposal, and some TDs, such as Willie Penrose, have been strongly insistent that the party must regroup in opposition.

Ms Burton’s spokesman said that while the party had made clear after the election that its future role was in opposition, there is now a “clear vacuum”.

A Fine Gael spokesman described it as “a constructive meeting” and said contacts between both parties would continue over the weekend before another meeting on Monday.