Kenny and Foster’s engagements are like the weather – chilly 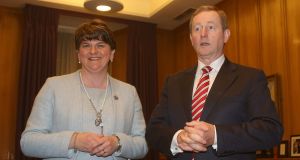 There is something about Arlene, as far as Taoiseach Enda Kenny and Dublin Ministers are concerned: just as in the similarly titled film about Mary – they can’t quite figure how to gain the First Minister’s affections.

The Taoiseach and troops of Government and Northern Executive Ministers are meeting at the North South Ministerial Council in Armagh on Friday to try to deal with the conundrum of Brexit.

Nobody seems to have a fix on how the puzzles and problems posed for Ireland, North and South – by the UK quitting the European Union – can be solved, especially since a majority in the North voted to stay in the EU.

But if there is to be an eventual resolution then the leaders of the two administrations would need to strike up a harmonious relationship.

And over recent weeks and months, despite protestations to the contrary, Arlene Foster’s engagement with the Taoiseach and with Dublin appeared – like the weather – to be getting chillier.

Former taoiseach Bertie Ahern forged the warmest of friendships with Ian Paisley when he was First Minister. Brian Cowen and Enda Kenny worked fairly easily with Peter Robinson, but the current Taoiseach has not formed a similar bond with Foster.

After all, she is viewed as being much more liberal than her predecessors. But she appears to harbour suspicions about the true intentions of her Southern suitors.

People have been talking.

They noted how she very publicly and irately rejected Kenny’s civic forum on Brexit. Speaking before last month’s Democratic Unionist Party (DUP) conference, she spoke of how much she liked Kenny and appreciated his trips to Enniskillen for the Remembrance Sunday commemoration – particularly to honour those killed and injured in the 1987 IRA bombing.

But that didn’t quite sit with her dismissal of the forum – “a lot of people making a lot of noise”, and generally just an event for the “Remoaners”.

Her conference claim that Irish Government “representatives” were talking down the Northern economy and attempting to “poach our investors” caused bad feeling. But she refused to follow it up publicly with specific evidence.

Dublin denied the claim but nonetheless a spokesman for Invest Northern Ireland – the equivalent of the IDA – in a carefully worded statement sided with the First Minister.

“As you will be very aware, Invest Northern Ireland competes for mobile inward investment with over 100 other development agencies, including IDA,” he said.

“I understand that the First Minister became aware of the specific approach adopted by the IDA during a recent visit to the US, with Invest NI, where she met with potential investors,” he added.

Earlier this month, at Stormont, Foster and Deputy First Minister Martin McGuinness met the Colombian president Juan Manuel Santos who was on a state visit to the UK.

But she did not meet Kenny who visited Stormont the same day where he met senior Sinn Féin, SDLP, Ulster Unionist Party and Alliance politicians.

And that’s why people were talking.

Chatting to politicians and officials, you would hear queries about whether her own back story has created a deep-seated antipathy to dealing with Dublin.

They wondered had the fact that the IRA, on separate occasions, almost killed her and her father when she was a schoolgirl engendered a hostility to the South.

The same people also wondered could this be an exercise in deflection to take away from the headache of Brexit.

Foster and other senior DUP figures will deny it but there is a big body of opinion in Northern Ireland that the DUP, playing to its more hardline base, supported Leave in the expectation and hope that the Remainers would win. Certainly, the DUP Leave campaign was barely noticeable.

As one local observer remarked, “Well, she’s in government with Martin [McGuinness], so she can’t give out about him. So, having a go at Enda perhaps creates the distraction that she feels she needs as she tries to grapple with Brexit.”

More generally people who know her well describe her as “quite prickly” and a “woman who would take serious umbrage if she felt she was being taken for granted”.

Kenny’s assumption that she would attend the forum therefore was not wise, they feel. They also remark that, less than a year in as DUP leader and First Minister, “she must still be finding her way and must, at times , feel a little insecure”.

And you will also hear, and this is from the South side of the Border, that if there is a strain in Dublin-DUP relationships that it isn’t all Foster’s fault.

For instance, there is a fairly general acceptance in Government circles that Kenny handled his Brexit forum idea poorly and that it did appear as if he were trying to bounce her into running with the proposal.

“We would also give her a free pass on not meeting the Taoiseach when the Colombian president was in town,” said another senior source. “We know that she had badly needed family time booked in advance that day and, in truth, the Taoiseach visiting Belfast when there is a state visit going on isn’t the best of good manners either.”

It seems there was some official back-channel work between the Irish side and the DUP and Foster’s advisers to try to patch up any differences ahead of Tuesday’s meeting between the Taoiseach and First Minister at Government Buildings.

Still, there must have been some official edginess about this encounter because reporters were told that there would be no joint press conference after the meeting.

In the end, Kenny and Foster did a two-hander together at Government Buildings. And the word from all sides is that there was a “clearing of the air”.

Neither rose to the bait of the jobs “poaching” claims, both allowing they were competitors and could not agree on everything.

Foster, for some reason, told reporters she never “used the term poaching” which was curious when what she said was that Government “representatives are sent out around the world to talk down our economy and to attempt to poach our investors”.

Again, but more subtly, she repeated the DUP would not participate in the Brexit forum but she made clear that she would fully engage, including through an increased number of North South Ministerial Council meetings.

That pleases Dublin because it means there is a formal structure in place to address very difficult issues that are critical to the future of the whole island.

“The glass is half full,” said one.

But they still can’t get a full handle on Arlene.

The view remains that she has not yet succumbed to the charms of Kenny, his Ministers and senior officials.

“But there is a thaw,” said the same source.