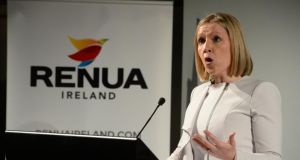 Lucinda Creighton’s Renua Ireland has hired a well-known political journalist and author as one of its advisers.

John Drennan, a former political editor with the Sunday Independent, took up his position as director of communications and political strategy with Renua on Monday morning.

Mr Drennan, from Portlaoise, Co Laois, will be based in Leinster House and will be responsible for shaping the new party’s message ahead of the general election.

As well as reporting on politics for the Sunday Independent, Mr Drennan has written four books, including Paddy Machiavelli and Standing by the Republic:50 Dáil Debates That Shaped the Republic.

In a statement, Mr Drennan expressed thanks for the “trust and responsibility conveyed by this new role in building a new politics where government will serve the interests of the citizens rather than the embedded state’’.