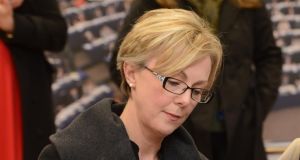 Fine Gael TD Regina Doherty has said the issue of who is given the jobs portfolio should be about policy and not personality. Photograph: Cyril Byrne/The Irish Times.

Fine Gael TD Regina Doherty has said the issue of who is given the jobs portfolio should be about policy and not personality.

Ms Doherty, who has been linked with a potential promotion from the backbenches, said while a number of Ministers are likely to leave Cabinet, the issue of job creation should not be party-political.

Speaking alongside Labour TD Michael McNamara on The Irish Times Inside Politics podcast, she said: “It’s not who takes ownership of [the Department of Jobs, Enterprise and Innovation], it’s to make sure that the policy that has been determined on a cross-departmental scale for the last number of years is maintained. You can have one personality or another personality taking the pat on the back at the jobs announcement. That’s not really my priority.”

There has been speculation the Labour party has its sights set on the department and may use the forthcoming EU commissioner position – widely anticipated to go to Fine Gael’s Environment Minister Phil Hogan – as a bargaining chip. The newly elected Labour party leader Joan Burton has publicly voiced her support for her predecessor Eamon Gilmoreto get the role.

Mr McNamara agreed with Ms Doherty, saying he was surprised at the amount of attention paid to who would ultimately receive the position.