Jeffrey Donaldson: Time coming when rift in unionism can mend

Lagan Valley MP enjoys 10,000 majority but constituency to be contested by eight rivals 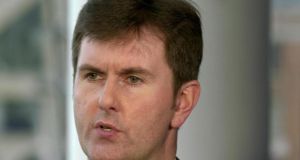 Jeffrey Donaldson: Out every day canvassing the streets of Lisburn and towns and villages of his constituency. Photograph: Eric Luke/The Irish Times

Jeffrey Donaldson reckons the time may be approaching when bitter divisions that separated Ulster Unionists from Democratic Unionists could be officially healed. It’s the unionist version of Civil War politics.

He’s out every day canvassing the streets of Lisburn and towns and villages such as Hillsborough, Moira, Dromore, Lambeg and Annahilt as well as the rural areas of his Lagan Valley constituency.

In 2010 he faced the main challenge from Daphne Trimble who was representing the disastrous Ulster Unionists-Tory link-up called UCUNF (Ulster Conservatives and Unionists – New Force), but he won by more than 10,000 votes.

In his career Donaldson can say he saw off two Trimbles, David and Daphne.

It recalls one of the abiding memories of a momentous day 17 years ago this month – Good Friday 1998. It was of Donaldson quitting the ugly Castle Buildings, getting into his car and driving out of the gates of Stormont – effectively into the arms of Ian Paisley even if it wasn’t until January 2004 when Donaldson, along with Assembly members Arlene Foster and Norah Beare, formally joined the DUP.

Back in 1998 Donaldson was an Ulster Unionist Party politician, having been elected MP for Lagan Valley the previous year, succeeding his patron James Molyneaux who died earlier this year. That was a time too when the UUP was the dominant unionist grouping with 10 MPs compared to the two seats held by Paisley and Peter Robinson of the DUP. 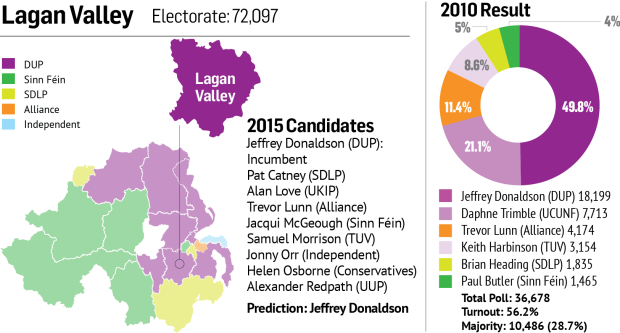 Donaldson’s then leader David Trimble made the decision that that Good Friday was the best chance Northern Ireland would get for decades. So he kept faith with the agreement, perhaps knowing it would destroy him politically.

He walked out of the final day of those Holy Week talks in protest at the failure to copperfasten an IRA commitment to decommission its arsenals. His exit set in train a political internecine battle that brought the Ulster Unionist Party to its knees, with Paisley and Robinson looking on with smug anticipation as Donaldson and other UUP dissidents did their destructive work for them.

Internal battle after battle was fought with Donaldson to the fore of the anti-agreement bloc before he finally exited to the DUP.

But with Trimble grimly holding on until 2005 the powersharing rationale of the agreement began to take hold, even if it needed the 2006 St Andrews Agreement to make it more palatable to the DUP. The IRA even decommissioned in 2005 although that was far too late for Trimble or for the UUP, while two years later Paisley and Robinson did what they opposed Trimble doing – shared power with Gerry Adams and Martin McGuinness.

When all the blood-letting was completed the UUP was a shadow of its former self, left with no MP and its Assembly strength cut from 28 to 13 seats.

Donaldson – now in the middle of his fifth Westminster election campaign – wonders can all that bitterness be consigned to the past. He welcomes the DUP-UUP pact, which means the DUP standing aside in Fermanagh South Tyrone and Newry and Armagh; and the UUP not contesting East Belfast and North Belfast.

“I would like to see that extended to other constituencies where there is a prospect of an agreed unionist candidate being successful,” says Donaldson. “I would like to see that co-operation taken forward across all political activity and one day perhaps we will see the two parties become one. I would certainly be a very happy member of that kind of political party.”

He thinks politics has moved on from the notion of Ulster Unionists representing a more liberal brand of unionism compared to the hardline fundamentalism of the DUP. “Both main unionist parties have changed and there is a coalescence of views on many, many issues. I don’t see any significant issue that really ought to keep us apart, at least in terms of practical co-operation.

“I don’t think there is any major issue that would get in the way of closer co-operation and perhaps eventually the two parties combining their forces.”

Of course he can afford to be magnanimous: the DUP won, the UUP lost. Still, his chief adversaries David Trimble and his wife Daphne – plus the majority of people on this island – must believe history will vindicate the signing of the Belfast Agreement; that without Good Friday 17 years ago this month there would be no Stormont institutions, shaky and all as they are at the moment. Possibly, there would be no peace.

There are Ulster Unionists who find it hard to be conciliatory to their former colleague Jeffrey Donaldson. Politics is a bloody business but as time marches on and as some of the bad memories fade perhaps that unionist healing process could be accelerated by people like Donaldson and Peter Robinson acknowledging that there would not be any heap for the DUP to be top of but for the courage and sacrifices of Trimble and those in the UUP who stuck by him?

Donaldson faces eight opponents in this contest from parties such as Ukip, TUV, Alliance, the SDLP and Sinn Féin with Ulster Unionist Alexander Redpath likely to come closest to him – but hardly too close.