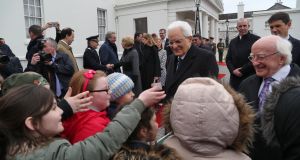 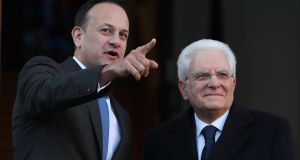 Speaking at a ceremony in the Mansion House, Mr Mattarella said cultural bonds would be key to strengthening the European project.

“Italy and Ireland have an age-old friendship – in the past, in the present, and of course in the future. Our cultural bonds are very strong, between Italy and Ireland, between Dublin and Rome.” He said Dublin was “certainly one of the most important European cultural hubs”.

“Sport is a very important bond that contributes to the unity of Europe, ” he said. He added: “Italy always looks forward to facing Ireland when it comes to rugby, because we always have a lot to learn.”

Mr Mattarella was presented with a crystal bowl by the Lord Mayor of Dublin Mícheál Mac Donncha as part of the ceremony, before travelling to attend a State dinner at Áras an Uachtaráin on Wednesday evening.

Speaking at the State dinner President Michael D Higgins said: “We greatly appreciate the solidarity Italy has shown for our concerns, including our determination that there can be no return to a hard border in Ireland.”

The current period in history was a “crucial time for the European Union”, he added. National parliaments and EU institutions must all be concerned that large numbers of Europeans “have little hope of employment or of meaningful education or training”.

Mr Higgins said a disconnected and despondent underclass “provides a dangerous resource for those willing to exploit the disillusioned, promising salvation through simplistic, populist and xenophobic nationalisms”.

On Wednesday morning, Mr Mattarella began the State visit with a welcome reception from Mr Higgins at Áras an Uachtaráin, and received a guard of honour and 21-gun salute from the Defence Forces.

The Italian president planted a tree within the grounds of Áras an Uachtaráin as a symbol of friendship between Ireland and Italy.

Mr Mattarella also briefly met with Taoiseach Leo Varadkar at Government Buildings as part of the visit. Tánaiste and Minister for Foreign Affairs Simon Coveney held a short meeting with the Italian foreign minister, Angelino Alfano, who travelled as part of the delegation.