Irish who died in past wars remembered

President lays a wreath in their honour 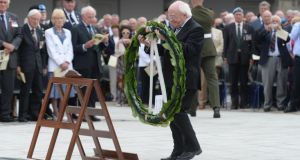 Various strands of society came together in Dublin yesterday to honour the Irishmen and women who died in past wars and on duty with the United Nations.

The multi-faith commemoration, at the Royal Hospital Kilmainham, was attended by President Michael D Higgins who laid a wreath at the commemorative plaque at the request of Taoiseach Enda Kenny. A minute’s silence was observed.

The last post was sounded and the national flag was hoisted to full mast, accompanied by a roll of drums. This was followed by the national anthem and an Air Corps fly over.

Politicians, faith representatives and members of the judiciary were among those in attendance at the solemn ceremony which was made up of military displays, religious readings and hymns.

Hundreds of people sat in the warm morning in the quadrangle to watch the event. The sun emerged intermittently and had arrived to stay as guests made their way home following a post-ceremony reception. Music and hymns were provided by the Army No 1 Band, conducted by Lieut Col M J Armstrong, and Celine Byrne.

The hymn, For the Healing of the Nations, included the words “For the healing of the nations/ Lord we pray with one accord/ For just an equal sharing of the things which life affords/ To a life of love in action help us rise and pledge our word.”

Opening the ceremony, Mr Kenny invited representatives of the Islamic, Christian and Jewish faiths to lead the act of commemoration, according to their tradition. “It is fitting that we remember here today all those Irishmen and women who died in past wars or on service with the United Nations,’’ he said.

Dr Martin said: “We pray for them, that through the mercy of God, they may be in eternal peace. We pray for the loved ones they left behind, dear family, friends and colleagues, that they may find comfort and hope in the knowledge that nothing can come between us and the love of God in Christ Jesus our Lord.’’