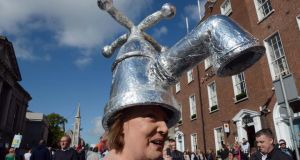 Irish Water has declined to comment on how its attempt to get out a clear message on charges will be affected if the Government introduces changes to the charging system today.

A spokeswoman said last night that reports of an introduction of a tax relief or credit to help people pay the new tax “were just speculation at this stage”.

She said the company could not comment until the Government had confirmed any changes.

She also said details last number of envelopes returned to Irish Water by the public with their details including PPS numbers would be revealed later this week or early next week.

Following a huge protest against water charges last weekend in Dublin, Labour’s Minister of State for Equality, Aodhán Ó’Ríordáin, said while the water charges were here to stay, there would be “some measure to help the lower paid and people on social welfare”.

The decision to provide relief is understood to have been made last Thursday, before the demonstration at the weekend.

More than 50,000 people took to the streets of Dublin marching against water charges on Saturday.

In one of the country’s largest protest in years, marchers took almost 1½ hours to pass the Spire on O’Connell Street, from Parnell Square, through the city and finishing at the GPO.

David Gibney, from the Right2Water campaign, said last night “the devil would be in the detail” in today’s budget.

“If it’s done in a tax credit, about 800,000 people are so low paid in this country they are not liable for tax credit. That’s about 40 per cent of all the labour force,” he said.

“We’re not looking for a tax credit, we’re looking to abolish water charges.”

Mr Gibney said water was a human right and should not be dependent on income.

“I think people see the bigger picture on all of this. Credits or reliefs are short-term sweeteners. In the long-term, you will lose those benefits over time,” he said.

“We feel the water charges are a step towards full privatisation of our water services.”

Mr Gibney said unless the water charges were abolished today, demonstrations would go ahead across the country on November 1st.

Mr Adams said he would be paying his water charges. “Yes I will be paying . . . because we want to be responsible,” he said.

“We won’t be calling on people not to pay. The point is some people cannot pay.”

Speaking on RTÉ’s Morning Ireland yesterday, Mr Adams said he had a family holiday home in Donegal and did not own a house in Co Louth.

“We cannot go on paying €1.2 billion per year for the production of water, with 40 per cent of it leaking away, thousands of people on boil water notices, dozens of treatment works not up to standard, and kilometres by the thousand of inferior pipework,’’ he said.