Irish Times Poll: Sinn Féin to examine if it should have run more candidates

Sinn Féin's Eoin Ó Broin was in buoyant mood whilst out canvassing in Dublin Mid-West as his party is riding high in recent polls. Video: Enda O'Dowd 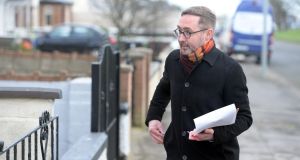 Sinn Féin will examine if it should have run more candidates in the election after the latest Irish Times/Ipsos MRBI opinion poll found it to be the most popular party in the country.

Eoin Ó Broin, the party’s housing spokesman, said Sinn Féin’s might have taken a different approach and selected more Dáil candidates if it had a “crystal ball” ahead of the campaign.

A surge in support saw his party rise to 25 per cent in Monday’s poll, ahead of Fianna Fáil (23 per cent) and Fine Gael (20 per cent). However, Sinn Féin is only running 42 candidates across the 39 constituencies, which is a little more than half of what would be required to have a Dáil majority.

“Of course if we had a crystal ball before the election was called we might have taken a different approach, but when you’re deciding your candidate strategy you do it months in advance, and you do it on the basis of what you think your likely seat gain and vote percentage is going to be,” Mr Ó Broin said.

He said that after last year’s difficult local elections, which saw Sinn Féin lose half of its council seats, the party took a decision to “focus much more on the positive alternatives that we were putting forward, and try and convince as many people as possible that there are solutions to the crises in health and housing and childcare”.

He said last November’s three byelections, in which Mark Ward was elected to fill a seat in Mr Ó Broin’s constituency, were “an indication that things were moving in the right direction”.

He said there was a “whole new layer of voters who, after four years of confidence and supply, were just really frustrated and were at least open to the possibility of voting for us”.

Mr Ó Broin also credited the performances of party leader Mary Lou McDonald in TV debates as being a factor in the party taking the lead in the polls.

The Dublin Mid-West TD also left the door open to Sinn Féin holding negotiations with all the other parties once the outcome of this weekend’s vote is known.

“We will sit down and work out should we have stood more, should we have not. But I don’t think anybody three or four months [before] the campaign could have predicted the very seismic changes that may be just about to happen in the Irish political landscape.”

He also urged voters to transfer to other “candidates on the side of change”.

“They line up Irish people against other Irish people. Ask yourself this, has Sinn Féin ever put the country before its own party interests. The word change has been ambushed and abused. Voters are being promised levels of spending and policies that would cripple the Irish economy again.”

Fianna Fáil education spokesman Thomas Byrne said that over the last number of years there had been more than 30 polls where his party trailed Sinn Féin. “Polls tend to get us wrong completely. They also tend to get Sinn Féin wrong.”

Asked if the party was worried about alienating Sinn Féin supporters and losing their vote transfers, Mr Byrne deflected and said “we are concentrating on setting forth the vision we have, a positive vision of change that can happen” and “to give people a shot at life”.