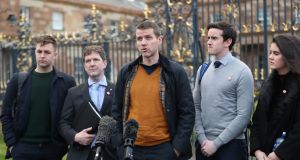 The meeting in Hillsborough Castle, Co Down, went ahead on Sunday afternoon, having previously been scheduled for last Friday when it was postponed with 10 just minutes’ notice.

Speaking afterwards, Ciaran Mac Giolla Bhein of Conradh na Gaeilge said: “We impressed upon the secretary of state the responsibility that his government has in fulfilling the obligations that were made in 2006.

“We outlined what, in our view, were the main components of the Irish language legislation and what it should include, which do involve things around visibility of the language, a language commissioner and official status.”

Conradh na Gaeilge had also focused on how important these elements were “in terms of building the stable powersharing institutions which are his stated goal”.

Mr Mac Giolla Bhein added: “He wants to reconvene Stormont in a way that will be sustainable in the future and to be able to navigate crises in the future. If that is to happen, it is incumbent on him to ensure that language legislation and rights for Irish language speakers form a very central part of that,” he added.

“We got a decent hearing, we got a fair hearing. He also reiterated his government’s position that their priority is to reconvene Stormont and to put a deal together which makes that possible.”

Mr Mac Giolla Bhein said the issue of an Irish Language Act would “still be on the margins” if it was not for campaign groups keeping it on the political agenda. He said: “Regardless of what emerges from these talks and whatever deal is put together as a result of these talks, people can be incredibly proud of that.”

In a statement following the meeting, Conradh na Gaeilge said it will continue to remind Mr Smith of his duty to implement the Irish language Act.

Sinn Féin’s deputy leader Michelle O’Neill said on Friday that “clearly” there would be an Irish Language Act in any deal to restore the Executive, one of the major sticking points in previous negotiations.

“Clearly there will be an Irish Language Act as part of a deal, but what we need to see is a package of measures that allows public confidence to be generated again in our ability to deliver good politics.”

Finding consensus on legislative protections for Irish language speakers is key to unlocking the deadline.

Parties are also at odds on proposals to reform a contentious cross-community voting mechanism in the Assembly – the petition of concern.

Three years on from the collapse of the devolved government, the Stormont parties have until a January 13th deadline to strike a deal to revive the institutions.

On that date, legislation to give civil servants additional powers to run Northern Ireland’s struggling public services expires and Mr Smith will assume a legal obligation to call a snap Assembly election.

DUP MP for East Londonderry Gregory Campbell said the deadline of January 13th means “there will be attempts to use it as leverage to get any type of deal over the line as opposed to detailed consideration in order that a good deal is achieved”.

He said: “Whether it is one party [Sinn Féin] making unacceptable demands or other parties standing side by side to accept that the unreasonable demand is met, will make no difference to us.

“Where the Irish language has a perfectly acceptable place in Northern Ireland society and is resourced appropriately, as it already is, there will not be a problem or opposition from the DUP or wider unionism, where there is an unacceptable and unreasonable demand to elevate it above all other minority languages, whether it is SF, other parties or her majesty’s government saying we will have to yield on this issue as it is preventing devolution returning, we will not do so.” – PA

1 Coronavirus: Cabinet to assess ‘stay at home’ measures as 50,000 deaths expected worldwide
2 Coronavirus: Should everybody be wearing masks to combat Covid-19?
3 ‘It’s Sinn Féin against the rest’: NI Executive in conflict over coronavirus
4 Coronavirus: Trump’s tone changes as US faces brutal loss of life
5 ‘Everyone still thinks it’s a joke’ - parents of toddler with coronavirus speak out
Real news has value SUBSCRIBE