Irexit Freedom to Prosper to field candidates in European elections

Republic is contributor of ‘€400m to old drunk men who make our laws’, agm hears 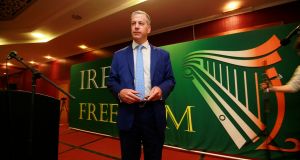 Party founder Hermann Kelly at the Irexit Freedom to Prosper conference at the Bonnington Hotel, in Dublin. Photograph: Nick Bradshaw

A new political party, Irexit Freedom to Prosper, campaigning for Ireland to leave the EU will field candidates in next year’s European elections, its founder Herman Kelly has said.

Speaking at the founding agm of the party at a hotel in Dublin on Saturday, he said: “Today is about fulfilling the legal requirements to register, to sign up 300 people, and to have an agm to elect national officers. We will be running candidates in the European elections.” The elections are due to take place alongside local elections, in May 2019.

Before the conference got under way, Mr Kelly said “the benefits and the necessity of leaving the EU” would be under discussion.

“Why? So we can take back control over trade policy, money and borders, and be a free country once again. We were a free country for a short period after we left the last political union we were in, which was the British Empire.

He said: “The relative advantages of being in the EU have decreased and now that we are a net contributor of €400 million a year to old, drunk men who make our laws I think we’re crazy to stay in.”

About 350 people attended the conference, many having travelled long distances. Among those who spoke was Prof Ray Kinsella of the UCD Smurfit Business School, who said “official Ireland” had “made the EU the custodian of our national interests”.

“It is important to recognise the founding visions of Europe and what it has accomplished but what is clear to me is that there have been structural and operational difficulties which have grown in recent years.” He said there were growing asymmetries of power and growing inequalities and there was now a “compelling case for an Irish exit”.

“Europe has changed fundamentally and we need to recognise that, so have we . . . In my view Britain is leaving not Europe but what Europe has become. The growth of populism reflects the pain, the deep-seated pain that austerity has imposed on the people of Europe.

“The trauma of Brexit [for the EU] should have been a catalyst for reform. Instead the establishment pulled down the shutters on reform.”

Ben Scallon (21), co-founder of Civil Right Media, said the biggest threat to “our freedoms” was the “EU super state”.

Describing the EU as “ultra left” and “Marxist” he said Marxism was a “murderous totalitarian ideology” which had “inflicted terrible suffering” on the smaller states in Europe.

In its political programme the Irexit Freedom to Prosper party says exit from the EU will “permit the Irish people to take back control” over a range of issues including lawmaking, human rights, borders and immigration policy, currency and foreign and security policy.

It sets out 12 principles, including to “support all efforts to strengthen the Irishness of Ireland, in particular its language and distinctive cultural and historical traditions”, and to promote a “society of liberty with a free and diverse media which supports free speech, freedom of association and freedom of religion”.

Among those attending was Richard Behal (70) from Killarney who said he had “consistently opposed membership of the EEC and now EU since 1972” and he had come to listen to what was being said.

Pat Buchanan from Dublin said he “would have some concerns about the EU” and was also worried about the manner in which Irish officials were “insulting Britain” in Brexit negotiations.