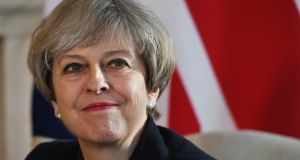 Theresa May: Once the exit letter from the British is received in Brussels, president of the European Council Donald Tusk will issue a response. Photograph: Facundo Arrizabalaga/EPA

Ireland will not be able to block the final Brexit agreement between the EU and the UK, even if the terms are unfavourable because the final vote will not be subject to a veto, senior officials have said.

“The final arrangements will be agreed by qualified majority voting,” a senior official said at a briefing for journalists in Government Buildings. “One country can’t block it.”

Qualified majority voting is the system under which certain EU decisions are taken on the European Council, the group of heads of government which is the EU’s highest decision-making body.

Though in practice most decisions are taken unanimously, legally decisions can be taken against the wishes of member states, unless they can assemble a “blocking minority” of 35 per cent of votes. Ireland has just below 2 per cent of the votes.

The British prime minister, Theresa May, is due to trigger the Article 50 mechanism to leave the EU on Wednesday, beginning a two-year countdown to the UK’s departure.

Senior government officials offered a briefing on the progress of Ireland’s preparations for the forthcoming negotiations, which will begin in the coming months.

Irish diplomats and Ministers have held more than 300 meetings with commission officials and with other EU states in a bid to ensure that the unique threat to Ireland North and South is understood across the EU.

Once the letter from the British is received in Brussels on Wednesday, the president of the European Council, Donald Tusk, will issue an immediate response, officials said.

On Friday, a draft EU position will be circulated by Mr Tusk to the 27 member states, including Ireland. The language will be closely perused by Dublin to ensure that its concerns have been taken on board.

Irish officials have held repeated talks with Mr Tusk’s office to ensure that Irish concerns about the reimposition of Border controls, and the unique status of of Northern Ireland, have been heeded.

However, the possibility of “special status” for Northern Ireland will not feature in the plans. Officials stressed yesterday that the Government had never sought “special status” for the North, but rather recognition in the talks of the “special circumstances” in Ireland. Ireland was now seeking that the position of the North be considered with “imagination and creativity”, officials said.

The Tusk document will serve as the basis for the full EU position which will be agreed by EU leaders at a summit on April 29th.

EU directives on individual negotiating areas will be agreed in the following weeks, and these will form the basis of the EU’s position when the full negotiations with the British begin, probably in June.

Much of the early focus will be on the financial settlement for Britain’s exit, which the EU has suggested could be as much as €60 billion, to cover the future pensions of British European officials and commitments to existing EU programmes.