Shane Ross accused of ‘legging it’ from aviation conference 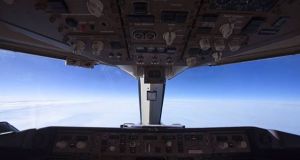 The National Civil Aviation Development Forum is made up of the chief executives of all the major airlines, airports, State agencies, and aviation leasing companies

The future of a Government forum involving the biggest players in Irish aviation has been cast into doubt over dissatisfaction at the level of engagement by Minister for Transport Shane Ross.

Members of the forum were particularly incensed that Mr Ross “legged it” after delivering his early-morning speech at a day-long conference in February attended by more than 200 leading figures in European aviation.

The Independent Alliance Minister was criticised for not “having the courtesy” to wait around to listen to other speakers or to discuss any proposals at the conference in Dublin Castle on February 20th.

The six-monthly meeting of its steering committee scheduled for last Friday was called off because many of the participants now feel it is becoming a pointless exercise.

The National Civil Aviation Development Forum is comprised of the chief executives of all the major airlines, airports, State agencies, and aviation leasing companies.

Established in February 2016, its first report in November recommended a number of tax changes and policy initiatives.

The February conference was addressed by Henrik Hololei, director general for transport and mobility in the European Commission, who spoke about air transport liberalisation. It also included debates on the key issues and challenges involving the leading figures in aviation.

Members of the 13-strong steering group were so discouraged by the Minister’s “zero positive response” to that report, and to his early departure from the conference, that they have questioned if there is any point in continuing. Mr Ross addressed the conference at 9am, but departed soon afterwards.

In correspondence seen by The Irish Times, Mr Kelly, the chief executive of AerCap, responded to an email reminder of Friday’s meeting by stating: “We have all given up a lot of time for this project as we want Ireland to succeed. However, we have seen no Government action to the detailed proposals we made.

“A lot of effort went into the proposals and a fair bit of cost was incurred by AerCap in collating all the information.

“The conference was another sacrifice of our time and, as noted (by a colleague) the Minister legged it without discussing any of our proposals or even having the courtesy to listen to us.”

Mr Toland of the DAA referred to two immediate “asks” from the forum’s report: one to confirm that air passenger duty (airport tax) was being abolished forever, and another to address a tax relief scheme to encourage Irish aviation companies to recruit senior talent from abroad.

“I am not sure of the merit of continuing to invest time and effort on it if on two absolutely aligned asks from the industry we are getting zero positive response.”

Mr O’Leary said he shared the lack of enthusiasm for last Friday’s meeting of the steering group.

He said the forum had spent months working to develop specific suggestions to develop the industry. The response from Mr Ross had indicated a “zero return for the time that has been invested: a ‘no’ on key taxation questions and a vague statement about the Department of Transport engaging [with other departments].”

Mr O’Leary referred in particular to the aviation tax. While it has been suspended, he characterised as “crazy” the decision by Government to leave the door open for its reintroduction.

He proposed to hold off on the steering committee meeting until later in the year. He said he and his colleagues would be happy to continue with the forum if there was some tangible evidence of a willingness to act.