Independents could hold the balance of power after election 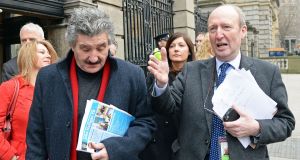 There will be considerable interest in the performance of Independent candidates, given opinion polls are suggesting they could hold the balance of power.

The Independent Alliance hopes to return in significant numbers and is likely to demand ministerial representation as the price of power if its support is required. Other Independents might support a minority government in exchange for constituency deals, while some of their left-of-centre colleagues will be unlikely to keep what they would consider a coalition of conservative parties in power .

The great unknown is how many Independent candidates, with no national profile, will be elected, perhaps because of local constituency factors.

Although the group has no leader, Mr Ross has emerged as its main spokesman, with Mr McGrath and himself the probable frontrunners for ministerial office if it holds the balance of power.

Mr Ross is contesting the new three-seat Dublin Rathdown, which replaces the five-seat Dublin South where he headed the poll last time. He is likely to head the poll again.

Mr McGrath, who was first elected for the Dublin North Central three-seater in 2002, is running in the new Dublin Bay North five-seater, where the candidates include Independent Senator Averil Power, formerly of Fianna Fáil. His strong Dáil performance on a variety of issues, and his assiduous constituency work, are expected to see him re-elected.

Mr Fitzmaurice won a by-election in Roscommon-South Leitrim following the election last year of Luke “Ming” Flanagan to the European parliament and rapidly became a vocal advocate in the Dáil and in the media for rural Ireland. He will contest the new three- seat Roscommon-Galway constituency.

Mr Halligan won a seat in the Waterford four-seater last time, having run unsuccessfully as a Workers’ Party candidate in the two previous general elections. The other outgoing TDs are Fine Gael’s Minister of State Paudie Coffey and John Deasy and Labour’s Ciara Conway. Mr Halligan and Ms Conway are seen as most vulnerable to a strong Sinn Féin challenge.

Mr Fleming, a former Fianna Fáil councillor, won a seat as an Independent in Kerry South in the last election after breaking with the party. He is contesting the new Kerry five-seater and will face a strong challenge from Fianna Fáil who want to regain a seat where it currently has none.