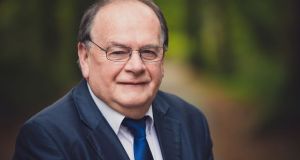 Tom Fleming: he said he was “lagging behind a bit in the north end of the constituency”

Independent TD for Kerry South Tom Fleming has announced he is not contesting the election. Scartaglin-based Mr Fleming said the redrawing of the Kerry constituency from two three-seaters into one five-seater had put him at a disadvantage.

He said he was “lagging behind a bit in the north end of the constituency”, but did not rule out a return to politics in the future. “I’d be really playing catch-up.”

Mr Fleming, who was due to stand under the Independent Alliance, was first elected to the Dáil in 2011, having twice failed to be elected as a Fianna Fáil candidate. He was a long-time member of the party, and had served as a party councillor from 1985 to 2011.

Mr Fleming said last night he had given the matter some thought over Christmas and had discussed it with his wife Lena and family. However, he did not want to make his announcement immediately or before the Dáil resumed as this would have negatively impacted on the Independent alliance which had only five TDs and two Senators and had planned its launch for January.

Mr Fleming’s withdrawal is likely to benefit Fianna Fáil, currently without a TD in the county. The party has two candidates in the five-seater: Norma Moriarty and John Brassil.