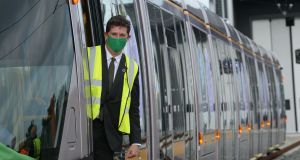 Minister for Transport Eamon Ryan has warned he could not make a commitment on the fast-tracking of the extension of the Luas light rail line to Bray. File photograph: Alan Betson/ The Irish Times

Wicklow County Council and other local authorities should not permit the construction of housing estates on the “speculative” basis that new public transport projects will be developed in those areas “down the line”, the Minister for Transport has warned.

Eamon Ryan said any development plan should be conditional on “concrete certainty” about where the public transport is going to go.

He issued the warning as he said he could not make a commitment on the fast-tracking of the extension of the Luas light rail line to Bray. The Minister pointed instead to investments in BusConnects and the DART+ programme, both of which he said would boost public transport capacity in Bray and surrounding areas.

Fianna Fáil TD Cormac Devlin estimated that an additional 50,000 people would be living and working in those areas over the next few years.

“Development plans were agreed on the basis that public transport would be upgraded, along with the extension to the green line,” of the Luas, he said.

The Dun Laoghaire TD warned that this “enormous” housing development planned over the next number of years would put increased pressure on the road network without proposed supporting public transport infrastructure.

Extension of the Luas lines to Bray, Lucan, Poolbeg and Finglas were included in the National Transport Authority’s 2016 transport strategy for Dublin. Proposals to extend it to Finglas were released for public consultation in July but it is likely to be another decade before the 4 km line opens to passengers.

The Minister stressed in the Dáil where the issue was raised that capacity is not a short-term issue.

“We should be very careful to say to Wicklow County Council and others that they should not be developing sites for projects or housing in areas on a speculative basis where we think there might be particular projects down the line,” Mr Ryan said.

He insisted that “we have to start integrating planning and development”. Mr Ryan supported public transport extensions “but we cannot have housing where we do not have certainty we will have public transport”.

Extending the Luas line beyond Cherrywood to Bray and other areas will be critically dependent on what happens to the MetroLink high speed light rail project and “that is not yet even in the planning system”, he said.

“Any development plan should, to my mind, be conditional on real certainty as to where the public transport is going to go in.