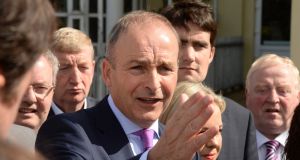 Increases in carbon tax and changes to the special VAT rate for the hospitality sector are being considered for the October budget, Fianna Fáil leader Micheál Martin has confirmed.

Fianna Fáil has entered discussions with the Government on Budget 2019, and the party’s finance and public expenditure spokesmen, Michael McGrath and Barry Cowen, met Minister for Finance Paschal Donohoe this week.

The Government and Fianna Fáil, whose support is needed to pass the budget, have already agreed that there will be €800 million for new measures.

However, some taxes will have to be raised to increase the October 9th budget day package to more than €1 billion.

Mr Martin said an increase in commercial stamp duty raised €400 million last year. His party is seeking €200 million for an affordable housing scheme and increased funding for the National Treatment Purchase Fund in this budget.

Mr Martin,who was speaking at the conclusion of the Fianna Fáil pre-Dáil think-in in Malahide, Co Dublin, said some revenue-raising measures were being discussed, such as the carbon tax and special 9 per cent VAT rate, but declined to go into further detail or say if they would actually be agreed.

He said certain areas of the hospitality sector, such as hotels charging high rates, could be singled out.

“We may, we may not, go down those particular routes but last year the commercial stamp duty provided about €400 million of additional revenue to the exchequer, which then got allocated to services,” he said.

“You can differentiate within that sector. That’s kind of work under way at the moment. I don’t want to go into the detailed discussions that are going on at the moment at government level with our negotiators, but also with others.”

Restoring the VAT rate to 13.5 per cent for hotels only would yield €208 million. Increasing carbon tax by 50 per cent, which would add roughly €2 to the cost of filling a car with diesel or petrol, and €1.20 to a bag of coal, would raise an estimated €220 million.