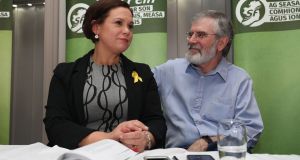 Gerry Adams and Mary Lou McDonald: “Mary Lou has been part of the leadership for a long time. It’s not like she has landed down from Mars.” File photograph: Niall Carson/PA Wire

It was a big claim to make. Today, the true test of it will begin when McDonald becomes president of Sinn Féin, bringing the 34-year leadership of Adams to an end.

The Dublin Central TD has long been viewed as the one most likely to succeed. She is smart, tough, abrasive but – unlike Adams – approachable and personable on a one-to-one basis. But as recent political history has shown, “natural successors” have not always been a success. Take Brian Cowen, for example. We all know how that ended.

Our objectives remain the same, to be in government north and south, Irish unity, reconciliation, a shared republic, a big change in social conditions

So, how will her leadership pan out? The Irish Times has spoken to a cross-section of current and former party representatives, officials and activists, north and south of the Border, to get a sense of their expectations.

“There is no denying that Sinn Féin has reached a particular point,” says Barry Doherty, a Sinn Féin councillor in his late 30s from Co Fermanagh. “Martin McGuinness has passed on. Gerry has retired. Other big names are stepping down. But then again Mary Lou has been part of the leadership for a long time. It’s not like she has landed down from Mars.”

Among activists, there was near-unanimous agreement that while McDonald’s style and emphasis may be different, her leadership will emphasise continuity, not radical change.

“Anybody who knows Mary Lou will know she has a different style and approach,” says the party’s publicity director Ciarán Quinn. “Our objectives remain the same, to be in government north and south, Irish unity, reconciliation, a shared republic, a big change in social conditions.”

For Cllr Maireád Farrell (27) from Galway, there will be a new dynamism but she’s not expecting a radical changed in direction. “There will be a different style, that’s naturally going to happen. There’s not going to be a marked difference in policy. That is decided at our Ard Fheis and by members.”

Cllr Sarah Holland, in her 30s, is from Belfast originally but has been living in Ballyboden, Dublin, for over a decade. An outspoken advocate within the party for change on abortion policy and women’s rights, she has high expectations of change.

Instancing a trip McDonald organised to bring all female candidates to Cork for a weekend, she believes her leadership will be more progressive. “I am very excited to have two female leaders. Mary Lou is different from Gerry in style and brings her own strengths. She is more approachable. She is warm and listens, and is a big advocate for women in the party,” she says.

She said there is no doubt that there’s huge enthusiasm about McDonald’s ability, her debating skills and her personality.

“I don’t envisage a huge change in terms of policy. What she will bring to the table is a really strong leadership,” says Paul Donnelly, a councillor in Mulhuddart in Dublin West. “She is powerful debater and I’m looking forward to her challenging Leo Varadkar and his tánaiste, Micheál Martin.”

Sinn Féin activists believe she will have a wider appeal than her predecessor, especially in the south which has been the main focus of the party’s efforts. “She is likeable and charismatic. Being a woman, she will have a different kind of appeal for voters,” says Farrell. 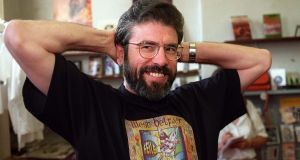 In Dublin West until now, Sinn Féin has drawn its support largely from the working class.That is changing, says Donnelly. “When we are canvassing in places like Castleknock, Georgian Village, Carpenterstown, Luttrellstown and along the Navan Road, people are interested in what Mary Lou is saying. They are interested win what Sinn Féin will look like when she becomes leader.”

The big question for us is unity. That was, is, and will be, our foundation

That’s partly because the skeletons of the Troubles clattered so noisily in Adams’s cupboard. Voters ruled out his party on those grounds alone.

Niall Ó Donghaile, the East Belfast-based senator, puts his finger on it. He says that every media interview with Adams inevitably ended up looking through the rear window at republican violence. “She will have the space to focus without distraction on other issues such as housing and health, without having to have one eye looking at the past.”

But does that mean eschewing Sinn Féin’s past? No member spoken to – young or old – would contemplate a distancing from the IRA or the campaign of violence. And all defended and praised the outgoing leader.

“The big question for us is unity. That was, is, and will be, our foundation,” argues Ó Donghaile.

A former member said the notion that all policy derives from the Ard Fheis is false. That source argues a small informal group around the leadership make the key decisions, that the structure of the party remains centralised and controlled, in a legacy of its military past.

That source also believes the party is comprised of too many “lifers”, who have never worked outside the organisation and have no wider life experience. “That really narrows its focus and hampers its development.”

Another big supposition surrounds doubts that McDonald, a middle-class Dubliner with no link to the Troubles, can command the respect of the Northern membership.

Speaking to Northerners, there was no reservation expressed and it quickly became clear McDonald has done her version of Charlie Haughey’s “chicken dinner circuit”, visiting virtually every cumann in the North over the past decade, showing if nothing else how long she has been preparing for this moment.

“I would guarantee that every member of the cumann has met her,” says Philip Cassin, a member in Armagh City. “During the elections she was in town and knocking on doors.

“We are an all-Ireland party. It was founded in Dublin. It has a southern leadership now. Mary Lou talks to the party north and south.”

For Ó Donghaile, her recognition in the north extends well beyond the party. “It’s not just in republican circles. She’s one of those people who are recognised on a first-name basis. It’s just Mary Lou for everyone.”

That chimes with Meghan Corcoran (29) in Armagh. “She was here a while ago. People who you don’t think are into politics were really interested in her. People can relate to her, she is well got, and very well known.”

In Fermanagh, Doherty agrees there are different dynamics on either side of the Border, with identity and unity looming more as the big issues in the North. But, he says, these differences are overstated.

For Donnelly, people vote Sinn Féin for different reasons in Dublin West. “The majority don’t vote on the national question but on local politics. They want to see what we can do to make their lives better.”

Belfast-born Holland does not see a big dichotomy. “Some feel that the six counties are a more conservative block. I have never that that feeling,” she says.

Being in government north and south is a key strategy for the party. In realpolitik, that means being a junior partner in a Coalition.

Most are sanguine about the prospect and identify Fianna Fáil as the most likely partner. “Our policy differs dramatically but we are a party that wants to go into government,” says Farrell on that point.

“If we can work with the DUP who can’t disguise their hatred for anyone who’s not them,” says Holland, “then we we can work with Fianna Fáil. There’s some bitterness among leadership figures in the Dáil. At the end of the day they are a republican party and so are we.”

Will it be McDonald who leads Sinn Féin through that gap? Officials acknowledge the party will struggle to make gains in the next general election.

Donnelly in Dublin West, Farrell in Galway West, and Pádraig Mac Lochlainn in Donegal are its best prospects. There is also the chance it could lose a number of seats.

The former member said McDonald will only get one term to prove herself. “There won’t be another Adams or McGuinness. I sense that the likes of Pearse Doherty or Matt Carthy might be waiting in the wings.”

Press director Quinn agrees in a oblique way. “That’s essentially what determines leadership. It is based on success and delivery. Like any party, that is what it comes down to in the end. That’s why Gerry was there for so long. He grew the party to where it is.”

For him, there is no doubt McDonald will also do that. “She will take the party in her own direction. She will listen to people. Let’s wait and see to find out what generational change looks like and feels like.”