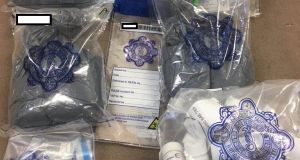 Two men have been arrested after gardaí seized more than €370,000 worth of drugs during a search in Dublin.

As part of an operation into the sale of controlled substances in the Tallaght area, gardaí searched a property at Russell Green, Tallaght, on Thursday.

During a search of the house and a car, gardaí discovered heroin with an estimated value of €363,300 and Zopiclone - a sleeping medication - worth an estimated €8,600, pending analysis.

Two men (aged 24 and 31) were arrested. Both are being held at Tallaght Garda station under section 2 of the Criminal Justice (Drug Trafficking) Act 1996 as amended.

Ryanair’s Michael O’Leary calls for extra checks on Muslim men 11:34
Teenager arrested after three-day barricade incident in Co Donegal 11:03
Man arrested after shooting rifle in direction of gardaí in Co Donegal 10:47
162 students have competed in the 2020 Irish Times Debate 06:00
The Irish Times Debate at 60: How changing topics reflected the ages 06:00