Harris has ‘failed to engage with pro-life side,’ campaign group says 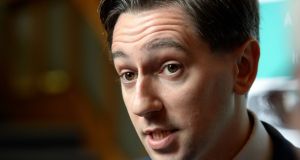 The Minister for Health has confirmed previously he supports repealing the Eighth Amendment and allowing for terminations on request up to 12 weeks. Photograph: Cyril Byrne/The Irish Times

The Pro Life Campaign has accused Minister for Health Simon Harris of crossing a line by offering his political support to two campaign groups seeking to repeal the Eighth Amendment.

The Irish Times recently reported on a meeting between Mr Harris and the Coalition to Repeal the Eighth and the National Women’s Council.

The Minister pledged his assistance to the two groups, who are seeking to remove Article 40.3.3 of the Constitution.

Spokeswoman for the Pro Life Campaign Ruth Cullen said the move by Mr Harris was unfair and undemocratic.

Ms Cullen said: “As Minister for Health, Simon Harris has pointedly failed to meet or engage with people from the pro-life side, including families who say they owe the life of their child to the Eighth Amendment.

“He is also the Minister who is overseeing the referendum. With this role comes an obligation to maintain a high standard of objectivity.

“The way the Minister is behaving at present does not inspire confidence that the forthcoming debate will be in any way fair.”

The Minister for Health has confirmed previously he supports repealing the Eighth Amendment and allowing for terminations on request up to 12 weeks.

While the Cabinet is united on the proposition to remove Article 40.3.3 of the Constitution, Ministers are divided on what legislation should replace it.

At the meeting on Friday, Mr Harris outlined to both groups the process ahead of the referendum, which is due to be held by the end of May, and the key dates in the Government’s timeline.

Speaking to The Irish Times after the meeting, Mr Harris said: “I was delighted to meet with representatives of the Coalition to Repeal the Eighth Amendment and the National Women’s Council of Ireland to brief them.

“A strong civil society campaign will be key in the weeks ahead and I look forward to helping in any way I can.”