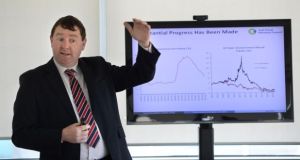 Ireland has not given itself sufficient breathing space to absorb the potential financial shock of a hard Brexit, the State’s fiscal watchdog has warned.

Addressing the Oireachtas Budgetary Oversight Committee on its latest assessment report, the Irish Fiscal Advisory Council (IFAC) also said the threat posed by a lack of action on climate change is now second only to overspending in health and more severe than potential volatility in corporation tax.

Much of the Oireachtas committee’s attention lay firmly on the spectre of a no-deal Brexit, a prospect in strong focus this week with the ongoing Conservative leadership contest in the UK.

IFAC economist Sebastian Barnes said they had examined what fiscal adjustments might be required to stabilise a financial deficit emerging as a consequence.

“These shocks are big enough that some of them would mean that not only would the slowdown that we have seen in the debt to GDP ratio stop, but in some cases it would actually go up again,” he said.

“So trying to stabilise it over a period of a few years would have quite a big impact. [Our simulations] suggest that if you did the adjustment very quickly you would need a fiscal adjustment of about €4 billion [IN ONE YEAR)]or if you did it over two years it would accumulate to about €5 billion.

“So these are big adjustments but they are much less big than what Ireland experienced in the wake of the financial crisis.”

IFAC chairman, University College Cork economist Seamus Coffey said he would welcome future policy that would mean “Brexit wouldn’t see a return to forced austerity; that we put in place policies that would allow us to absorb this shock”.

He said if Brexit caused the country’s debt ratio to rise, it could directly affect how the country borrows from financial markets.

“One of the consequences of recent fiscal policy [is] that we haven’t given ourselves sufficient room to absorb the potentially very large shock that a hard Brexit could present to the Irish economy and to the public finances,” he said.

IFAC has called for the creation of a “prudence account” which could be used to park excess corporate tax and insulate it from the active exchequer budget in any given year.

“By in large [excess tax receipts] have been used to mask the overruns and the additional spending we have seen across a range of areas, most specifically in health,” Mr Coffey said.

“If you were to take those out...put them into a prudence account...any overruns in health and other areas would become much more visible.”

IFAC has not predicted a collapse in tax receipts but anticipates a reversal in recent performance - a repeated message in its reports.

Green Party leader Eamon Ryan said it was a very worrying report, representing an “I have it so I will spend it attitude” on the part of the Government.

In terms of climate change, it notes that costs associated with Ireland missing its 2030 emissions reduction targets could extent to as much as €5.5 billion.

IFAC economist Eddie Casey said such fines are why climate change is ranked second in terms of fiscal threat.

However, while the raw numbers suggest it is a greater risk than potential volatility in corporation tax, Mr Casey said there was more time to address the climate issue and “change course”.

“With corporation tax it’s slightly different in that the risks could materialise next year; it’s very unclear when they will actually emerge,” he said.