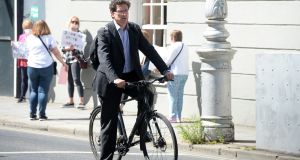 Eamon Ryan, leader of the Green Party: the party has made the pledge to divert money from roads to public transport a centrepiece of its transport policy. Photograph: Dara Mac Dónaill

The Green Party’s plans to shift billions of euros from road-building to public transport will be hampered by the structure of the roads budget.

Two-thirds of the annual roads budget is spent on maintenance and upkeep, while many major capital projects are funded by public-private partnerships, meaning there is no large pot of exchequer funding to be redeployed.

The Greens have promised to reprioritise transport budgets away from roads towards public transport. But the body that oversees the road network, Transport Infrastructure Ireland (TII), says that about 65 per cent of its annual budget is required for previously committed payments and maintenance to ensure a “steady state”, ie, keeping the road network in its present state.

Of the remaining 35 per cent, most of the spending this year is accounted for by three major road projects under construction and a series of minor projects.

“There is very little wiggle room in relation to funding availability and all the money available at the start of the year is allocated to local authorities against existing commitments as well as what has been committed to under the NDP,” a TII spokesman said.

The Greens, who did not wish to discuss the issue, citing the confidentiality of the government formation process, have made the pledge to divert money from roads to public transport a centrepiece of its transport policy, and central to the party’s goal of reducing carbon emissions.

In its manifesto, the party promised to use 20 per cent of the transport capital budget for cycling and walking, and split the remaining balance on a 2:1 ratio between roads and public transport.

Green TDs have also pushed for a rewiring of the National Development Plan, which promised to spend more than €10 billion on roads over the course of the plan.

However, TII says the vast majority of its budgets on an annual basis are pre-committed and that large capital projects are usually funded by public-private partnerships, meaning there is no massive budget of capital spending to be reallocated.

TII says 65 per cent of all available funding this year is required for “committed payments and steady state upkeep”. These are costs associated with PPP payments, tolling operations, network monitoring and essential maintenance to maintain the asset value and to keep the network operating efficiently, it says.

The parties are understood to have discussed justice issues, and are expected to move onto financial and economic matters later in the week, when a series of briefings from senior officials are expected.

The briefings are likely to dwell on the impact of the Covid-19 pandemic, and the State’s response to it, on the public finances and the overall economic outlook.

The parties have agreed a schedule and a structure for the talks. It is understood Fianna Fáil is anxious to progress the talks quickly, a view shared by some – though not all – senior figures in Fine Gael.

The economic and financial briefings are expected to take place on Wednesday. Contrary to some expectations, there will be no parallel strands of the talks, which had been suggested to expedite the pace of agreement. The Green Party is insisting that its TDs are briefed on all developments in the negotiations as they happen, which insiders suggest will mean the talks are likely to progress slowly.