Dog fouling: ‘Like drink-driving - we need a bigger campaign against it'

Dubliners are being urged to report dog owners who fail to pick up after their pets, to local authorities. A new hotline number 1800 251 500 has been established by the four Dublin councils to handle reports of dog fouling. 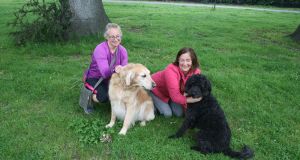 Amanda Hutchinson from Rathfarnham with her dog, Vance, and Wendy Mantle from Knocklyon with her dog, Brooke, in Bushy Park, Terenure, Dublin.

Dog walker and groomer Yvonne Meldon (57) takes up to five dogs around Bushy Park in Terenure, south Dublin, each morning. Picking up dog poo is part of the job: “You absolutely need to pick it up. It’s disgraceful when people don’t,” she said.

The park allows dogs run free before 11am, on condition that owners keep an eye on them, and clean up after them when necessary, according to Ms Meldon.

Many people with dogs are distracted, said her walking companion, Yvonne Dolan (57): “You see them with their headphones in and they’re staring at their screen and the dog is behind them. They just don’t notice it.”

It is a persistent problem for local authorities. Dublin City Council blames “irresponsible owners” for failing to clean up after their pets, saying it is “incumbent” on them to respect their local community.

Dog fouling has been one of the most frequently heard complaints by local election candidates across all four Dublin local authorities, and in many other urban areas.

Penalties, however, are few. Since January 2018, 194 complaints have been made to South Dublin County Council. Not a single fine was issued. Dublin City Council received 77 complaints last year. It issued four fines. Fingal County Council, meanwhile, fined seven culprits, while Dún Laoghaire Rathdown Council has imposed no fines since 2016.

“It is extremely difficult to issue fines. The warden [has] to be on the spot when the offence is happening and then obtain the dog owner’s name and address. When the warden is in the locality, everyone picks up after their dog,” said a Dún Laoghaire council official.

If she gets dog poo on the tyres then she gets it on her hands and under her nails, which is very upsetting for her

Ms Meldon and Ms Dolan believe people would not be so careless if they knew the health implications. “It’s like drink-driving . . . there needs to be a bigger campaign against it,” Ms Meldon said.

Dog faeces can carry e.coli and campylobacteriosis, which can both cause cramps, nausea, vomiting, diarrhoea and fever in humans who come in contact with it. Campylobacteriosis can also cause life-threatening infections in people with an immune problem. Dog faeces can also carry Toxocara canis (also known as dog roundworm), which can infect humans who come into contact with it. While many people affected by it do not get sick, the larvae can cause eyesight loss and have a serious impact on the liver and central nervous system, causing symptoms such as fever, fatigue, coughing, wheezing or abdominal pain.

Last year, a University College Dublin study found 13 per cent of stray dogs in Dublin carried Toxocara canis. “Most of these dogs would have been owned before they went astray, so we would have expected to see a lower level of infection,” said Theo de Waal, associate professor of veterinary medicine at UCD.

Dogs should be wormed at least every three months, according to Dr Michael Brady, a vet with the Animal Welfare Clinic in Dublin.

Dog poo is political, according to People Before Profit candidate Bernard Mulvany, who is running in Clontarf on Dublin’s northside in the local elections. In fact, it is the second biggest issue on the doorstep, after housing.

For Mulvany, a stay-at-home carer for his wheelchair-user daughter, the issue is also personal: “My little girl is very independent and she has to self-propel herself. If she gets dog poo on the tyres then she gets it on her hands and under her nails, which is very upsetting for her.

According to the Green Party’s Cllr Patrick Costello, of Kimmage and Rathmines ward, “People are always complaining about dog fouling in the parks. They understand there are bigger issues in society, like homelessness, but this is a constant issue.”

Last February, Costello, along with his party colleague, Claire Byrne, argued for “creative solutions” to the problem, calling on Dublin City Council to spend all of the money put aside to deal with litter or dog fouling for one year.

None of these ideas were accepted, Mr Costello said. “I think they [the council] take the issue seriously but I don’t think they are doing all that they could be,” he said.

However, Gillian Bird of the Dublin Society for the Prevention of Cruelty to Animals believes it is not the job of any council. Every dog owner should have biodegradable bags to pick up poo, and put it in their black bin when they get home, she said.

Back in Bushy Park, golden retriever Vance and labradoodle Brooke bound away from their owners Amanda Hutchison and Wendy Mantle ahead of the 11am lead curfew.

“To me it’s criminal to leave it out where children are playing,” said Ms Hutchison. Ms Mantle agreed it was a “disgrace”, adding she even brings bags to give to people who do not bother to bring their own.

Meanwhile, it is relatively simple to train dogs to go to the toilet in one place, said the DSPCA’s head trainer, Tanya Clarke. Contrary to popular wisdom, old dogs can learn new tricks.