Concern in OCI over potential return of Pat Hickey to board 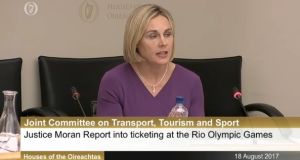 Officials in the Olympic Council of Ireland (OCI) would have significant difficulties with the return of the organisation’s long-time president Pat Hickey to its board, his successor has said.

Mr Hickey, who resigned last year after 27 years as OCI president following his arrest as part of an investigation into alleged ticket touting at the time of the Rio Olympics, this week said he was looking forward “in due course to resuming my international Olympic duties” once legal proceedings in Brazil are complete.

Sarah Keane, who was elected OCI president in February, said that if Mr Hickey returns to his role on the International Olympic Committee he would be entitled act as an ex-officio member of the Irish Olympic movement.

She said the current board would not be comfortable with his return to the OCI.

Ms Keane was speaking at a meeting of the Oireachtas Committee on Transport and Sport where a report by Mr Justice Carroll Moran into last year’s Rio ticketing controversy was being discussed.

The judge criticised governance at the OCI under Mr Hickey’s leadership and said the organisation had prioritised its commercial interests over the concerns of athletes when it came to tickets for last year’s games.

Ms Keane told the committee the controversial agreement between the OCI and hospitality group THG, appointing it as Ireland’s Olympics ticket re-seller through 2026, was signed early last year.

She said the OCI had no documentation in its possession regarding the deal struck between Mr Hickey and THG, a firm which the organisers of next year’s South Korea Winter Olympics have said they do not want handling Irish tickets. She said she was never knew anything about the deal until recently.

Ms Keane also said there was no board approval of the decision to allow THG to act as the OCI’s ticket agent and that the decision was taken by Mr Hickey.

In a letter sent to the OCI, the PyeongChang Organising Committee for the 2018 games said it had become aware of allegations that THG was involved in the attempted illegal resale of tickets in Rio.

“We see such allegations against THG’s executives as a serious problem, since this incident raised doubts on THG’s ability as an [Authorised Ticket Reseller] to act fairly in reselling tickets.”

Ms Keane this week said lawyers for the OCI were currently reviewing the terms of the contract and that it seemed like a “pretty watertight” arrangement.

Fianna Fáil TD Robert Troy asked the chairman of Sports Ireland Kieran Mulvey, who is also addressing the committee, about a recent dinner he had with Mr Hickey.

Mr Troy said it was “bad optics” to have such a meeting with a man who was responsible for the establishment of an inquiry.

Mr Mulvey said he met Mr Hickey on humanitarian grounds to see how the controversy had effected him and his family. He said he would not try to get Mr Hickey to come before the committee.