Taoiseach meets gardaí, PSNI and officers from England who are marching in Belfast Pride

Speaking at Pride, Belfast, an Taoiseach Leo Varadkar has said that he believes it is 'a matter of time' before marriage equality is introduced in Northern Ireland. Video: Reuters 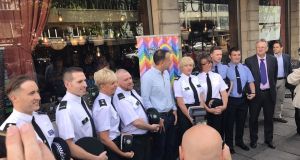 In Belfast today, Taoiseach Leo Varadkar met gardaí PSNI and some gay officers from England who are taking part in Belfast Pride.

It is “only a matter of time” before same sex marriage is legislated for in Northern Ireland, the Taoiseach Leo Varadkar said in Belfast on Saturday.

Mr Varadkar, at the end of his two-day visit to Northern Ireland, attended a gay Pride breakfast at the Northern Whig pub in central Belfast ahead of the main Pride parade.

Outside the pub, Mr Varadkar met Garda, PSNI and some gay officers from England who are parading in uniform at the Pride parade on Saturday afternoon.

Conscious that the DUP opposes changes in legislation and that it is a matter for the Northern Assembly should it ever return, Mr Varadkar said, “I am not here to unsettle anyone but I am here to show my support and the support of my Government for equality before the law for all citizens no matter where they reside”.

He said he “totally appreciated” it was an issue for the Assembly to legislate upon. But, nonetheless, he predicted gay marriage would be introduced in Northern Ireland.

Asked did he believe same sex marriage would be legalised, he said, “I do, I think it is only a matter of time. Of course, the decision is for the Northern Ireland Assembly. But I am confident that like other western European countries they will make that decision in due course.”

Mr Varadkar said he did not raise the issue with DUP leader when he met her on Friday, but that previously he advised her of his views. The Taoiseach said he knew Northern Ireland “well enough” and believed that public opinion on gay marriage had “moved on a long time ago”.

“My reason really for being here is just to express solidarity, to express my support and that of my government, for individual freedom and equality before the law for all citizens. We would do this in any part of the world,” he added.

Mr Varadkar said the Pride march would be the biggest march in Northern Ireland this year and a “celebration of diversity and difference”.

Asked was this the “new normal” for Northern Ireland, Mr Varadkar said, “I hope so”.

After meeting gardaí and PSNI officers who are attending the Pride parade, Mr Varadkar said, “I am delighted that this is the first occasion on which the Garda Síochána and the PSNI are marching together in a Pride (parade).”

Garda Chief Superintendent Tony McLoughlin, who was representing the Garda Commissioner Nóirín O Sullivan, said it was a “very important and historical day” that gardaí were joining PSNI and other police officers for the first time in uniform at the Pride parade.

He said he understood this was the first time that uniformed gardaí had attended a public event in uniform in Northern Ireland. He said he expected that nine gardaí were participating in the parade.

“We are here to represent all of society,” she said.